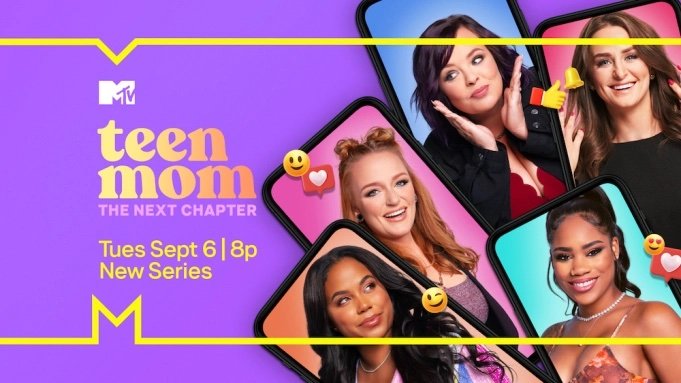 On Friday afternoon, MTV confirmed a pair of long-gestating rumors:

In news broken by Friday, Teen Mom: The Next Chapter will debut on Tuesday, September 6 at 8/7c.

Based on the trailer, which was also released today, storylines on the show will include Amber celebrating the end of her probation and Maci growing closer than ever to her husband, Taylor.

At one point, we also see Briana celebrating Kailyn Lowry’s lawsuit against her getting dismissed… and then telling the group:

The preview then cuts to a quick shot of Jenelle Evans getting out of a car, with gasps heard in the background.

The much-maligned former cast member will not be a series regular on the new program, but any sighting of her at all much come as a shock to veteran viewers.

Eans, of course, was let go from Teen Mom 2 in May 2019 after her husband, David Eason, shot and killed their family’s dog and then Child Protective Services took away her kids for about a month.

Since that time, Jenelle has mostly just uploaded photos of herself in scantily-clad outfits on social media.

She’s been selling nude photos of herself to make money, a practice she’ll likely need to continue because we can’t imagine she was paid much for this Teen Mom cameo.

It’s worth noting, meanwhile, that the cast of Teen Mom: The Next Chapter will feature all of the current stars of Teen Mom and Teen Mom 2… except Kailyn and Mackenzie McKee.

We’d have to imagine we’ll hear some response from each snubbed star, although Lowry did recently say she was quitting Teen Mom.

This new franchise comes on the heels of both Teen Mom OG and Teen Mom 2 floundering in the ratings over the last few seasons.

As outlined by Variety in its feature:

The 15-episode show will follow the moms as they face the reality of parenthood as each are in many different stages. While some have children still in diapers, others are now mothers to teenagers.