The things she does for fashion. Watch Kim Kardashian struggle to walk in skin-tight dress 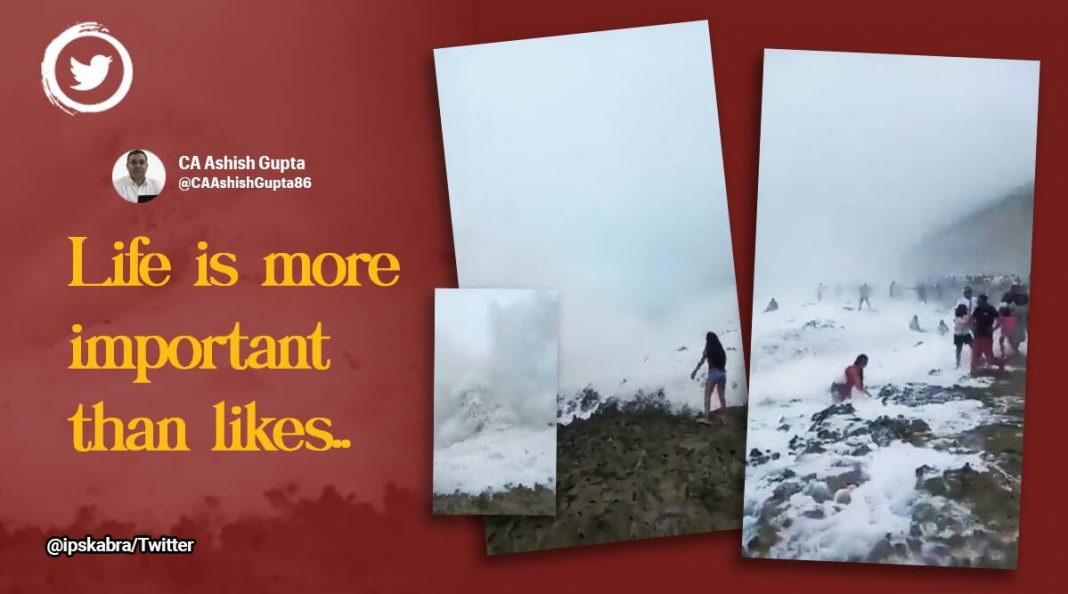 A holiday at a beach in Oman’s Salalah turned into a tragedy for an expat Indian family, when strong waves swept away eight persons from the shore. The jaw-dropping moment caught on camera has taken social media by storm, triggering debates on valuing life more than “likes”.

Two persons have died, while three are still missing.

A video doing the rounds on social media shows three young females posing on the rocky shores of Salalah Al Mughsail beach for photographs despite the violent waves. Soon, as the waves land they lose their balance and fall to the ground. While one woman was seen being pulled away by a man, others were being washed away as they cried for help. Two men are seen rushing to help and they could extend their hands to pull them out in time.

Five others were also swept away by the strong waves when they were seen too close to the powerful tides.

Watch: A family is swept away by a giant wave on #Oman‘s Mughsail beach after eight members reportedly crossed the beach’s boundary fence.https://t.co/2KHqOMobdD pic.twitter.com/w2auuYfUku

According to Gulf News, the Civil Defence and Ambulance Authority (CDAA) said it managed to rescue only three of them, while five others were still missing.

The CDAA said the family was having fun at Al Mughsail beach in Dhofar Governorate when they were swept away by the strong waves.

So unfortunate don’t know why people don’t understand that life matters more than the risk they take to enjoy some moments of joy.

I hope people are alert after this video and pledge not perform any risky act. I pray that all the people in the video are saved.

Just for a photo. Is such a risk worth taking.
Maybe they didn’t realise the danger.

In an update, the Times of Oman Tuesday reported that out of the five missing two were found dead and three were still missing, including two children. Photos shared by the Omani authorities show a Royal Air Force helicopter assisting a team of rescuers in search of the missing three.

According to Al Arabiya channel, the tragedy was one among the many incidents reported across Oman, where adults and children alike were caught by strong currents in the country’s many valleys and beaches owing to the downpour over the long Eid holiday weekend.

Following the tragedies, the CDAA has also cautioned that a majority of drowning cases occur in dams, ponds, water springs, beaches, valleys, water channels and streams. It has also asked the people not to go swimming at non-designated sites, and follow the instructions and monitor the activities of their children during such outings.