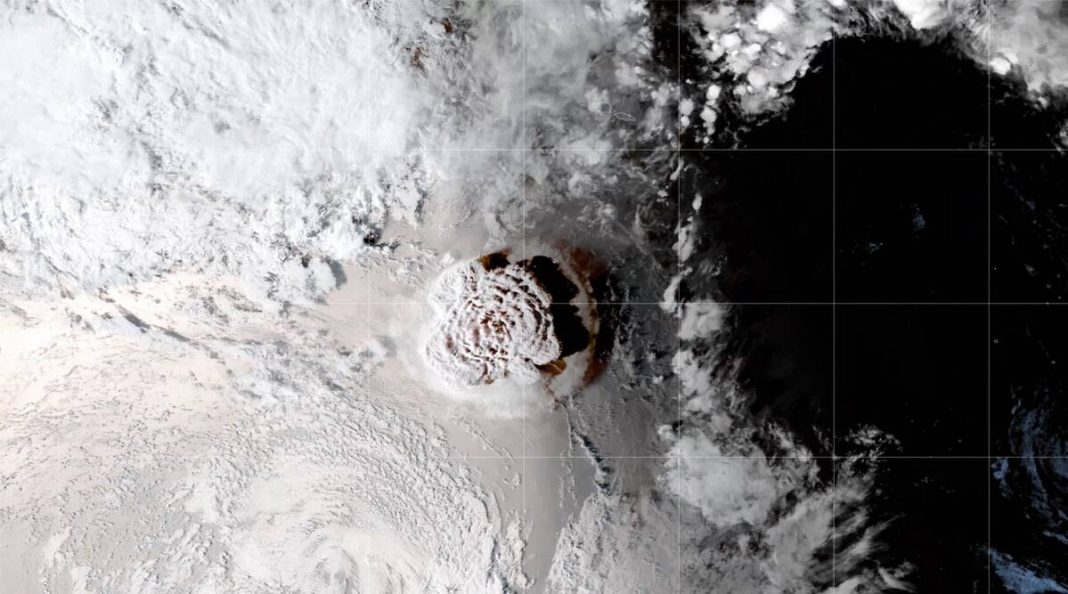 The Hunga Tonga-Hunga Ha’apai volcano erupted in January this year and produced the largest atmospheric explosion in recorded history. The eruption sent shock waves around the world and a plume of ash into the upper atmosphere. New research has confirmed that the eruption was the most explosive volcanic event in the modern era.

The new study published in Nature combines extensive satellite data with ground-level observations to show that the eruption was unique in both its magnitude and speed, and in the range of the fast-moving gravity and atmospheric waves it created.

After a series of small events that began in December 2021, Hunga Tonga erupted on January 15 this year, producing a vertical plume of ash that extended more than 50 kilometres above the surface of the earth. For the next 12 hours, the heat released from the water and hot ash in the plume remained the biggest source of gravity waves on Earth for the next 12 hours. It also produced ripple-like gravity waves that extended across the Pacific basin, according to satellite observations.

The volcano also triggered atmospheric waves that reverberated across the planet at least six times and reached closed to the theoretical maximum speeds for such waves: 320 metres per second, the fastest ever seen within our atmosphere. These waves also reached the edge of space. A single event dominating such a large region has been described by the paper’s authors as unique in the observational record. Observations from the event will help scientists improve future atmospheric weather and climate models.

In May this year, Shane Cronin, a volcanologist at the University of Auckland in New Zealand, led a group of researchers and sailed over the volcano’s caldera, which is the central depression that forms when a volcano erupts. They used sonar to map the caldera’s structure and found that the four-kilometre-wide depression had dopped in depth from less than 200 metres below sea level to more than 850 metres.

According to Cronin, the reason for this large explosion was probably the interaction between large amounts of magma and water as the eruption began. The large temperature difference between the water, which was around 20 degrees Celsius and the magma, which was around 1,100 degrees Celsius, meant that as they both are forced into contact, an explosion occurs. Like this, each interaction would have pushed water deeper into the edges of the magma, increasing the surface area of contact and driving further explosions in a chain reaction.

The initial depth of the caldera was just shallow enough that the water pressure did not suppress the blast. But at the same time, it was deep enough that the magma was fed huge amounts of water to power explosions, resulting in many large blasts and hundreds of smaller ones every minute. Eyewitness accounts from the day of the eruption reported “crackling and noise like artillery fire” as far as 90 kilometres away from the eruption, according to Cronin.