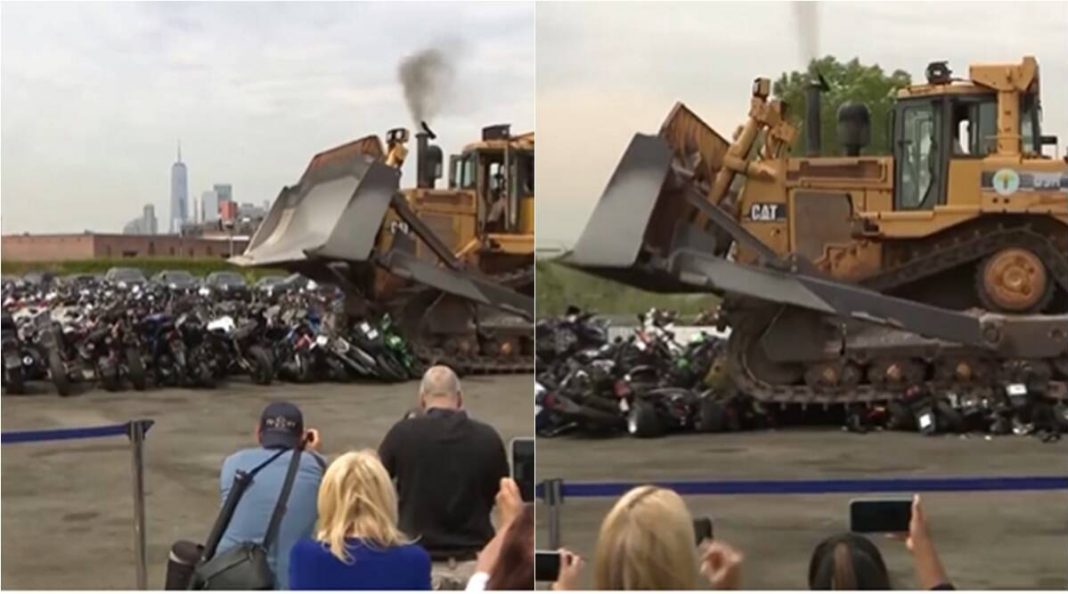 In a bid to make the streets of New York safer, the city’s mayor has taken a drastic step — he has seized and destroyed hundreds of ‘illegal’ two-wheelers using bulldozers.

“Illegal dirtbikes and ATVs endanger the lives of New Yorkers. We’re not letting them go unchecked,” NYC Mayor Eric Adams wrote on Twitter. “Get the message: you want to terrorize our neighborhoods? You’ll get crushed.”

Adams also tweeted a GIF of himself posing against the backdrop of the two-wheelers being destroyed.

During a press conference held at a Brooklyn auto pound Tuesday, Adams spoke about the cooperative effort between the mayor’s office and police department to rid the city’s streets of illegal motorbikes. He then flagged off the destruction drive. Within a couple of minutes, hundreds of motorcycles parked on the lot were trampled under the heavyweight machinery, as all watched.

Illegal dirtbikes and ATVs endanger the lives of New Yorkers. We’re not letting them go unchecked.

This year we’ve already taken nearly 2,000 bikes off the street and we’re just getting started.

Get the message: you want to terrorize our neighborhoods?

“Today, as we stand in the shadow of the Freedom Tower, we are freeing ourselves from these destructive pieces of machinery,” said Adams, during the press conference. “They will be crushed today so that they can never terrorize our city again. Each and every one of them, they will be turned into scrap metal and eventually recycled.”

Now, videos and photos of his action, which some citizens have dubbed as “hardcore”, are viral.

While some people supported Adams’ move, others were skeptical. Several people, however, were seen enjoying the spectacle on social media.

They could have sold many of these to help pay for all the programs they cut for police budgets.

Agree.. he shouldn’t be emotional when running a city. Should have just resold them back to the community to gain money and then confiscate again. The cycle ♻️ continues. They just added so much to the landfill for no reason. Teach your community, don’t destroy it.

Why donate those bikes when you could create more toxic landfill? 🙃

I support this 1000 percent

This is the way. Hope to see more before the summer is out.

Wow. So much swagger. Maybe fix the subways next.

I wish they were guns!!

Thank you @NYCMayor. These bikes and ATVs are a menace to everyone on the streets and sidewalks of #NYC.

I guess the fear was them being auctioned off to someone that would just use them on the city streets again.

They could have been shipped to a location where they could be used that was far from the city though.

I feel like there could have been a cheaper, non dramatic solution for sure.

CBS News reported that according to NYPD Commissioner Keechant Sewell, the police have reportedly seized about 2,000 illegal motorbikes from New Yorkers since January, which marked an 80 per cent increase from the number of dirt bikes and ATVs removed from city streets during the same period in 2021.

The mayor and the police also pledged to ensure stricter regulation on illegal riders making people safe on streets.