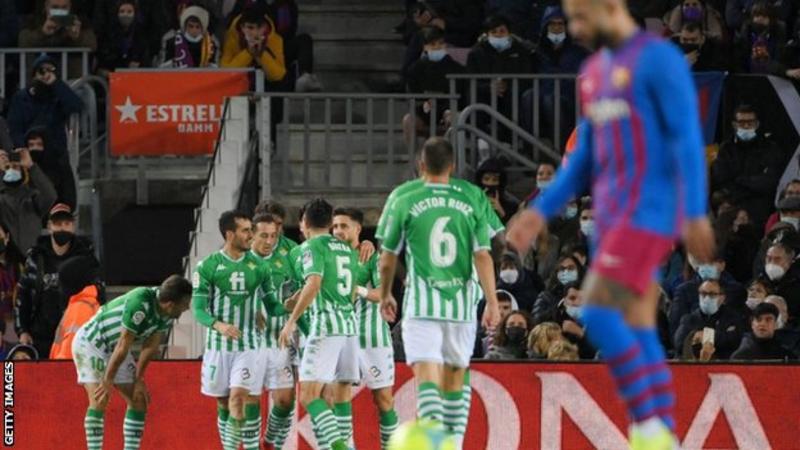 Xavi’s unbeaten start as Barcelona boss was brought to an abrupt end as the Catalan giants were defeated at home by Real Betis in La Liga on Saturday.

Juanmi finished a swift Betis break to send the visitors third in the table, six points behind leaders Real Madrid but having played a game more.

Xavi had won his opening two league games in charge, as well as drawing with Benfica in the Champions League.

But his side now sit seventh in La Liga, six points off the top four.

It was a deserved victory for Betis, who thought they had taken the lead when Juanmi flicked the ball beyond Marc-Andre ter Stegen, only to be ruled offside.

He did however get his goal with 11 minutes to go after Betis counter-attacked down the right and worked the ball across to the forward, who slid an effort into the corner.

Philippe Coutinho poked an early strike at goal that was saved at the near post but Barcelona struggled to open up the visitors before the break.

Second-half substitute Ousmane Dembele made a difference and curled an effort wide from distance before fizzing another across the face of goal.

But Barcelona, who need a result at Bayern Munich in midweek to guarantee they reach the Champions League knockout stage, could only muster three shots on target with one of those a Clement Lenglet header from a corner.

The hosts wanted a penalty when Ronald Araujo and Andres Guardado tangled in the box in added time, only for it to be deemed a foul on the Betis captain.

It meant the visitors held on for their third successive win in La Liga and they now switch attention to a trip to Celtic in the Europa League on Thursday.