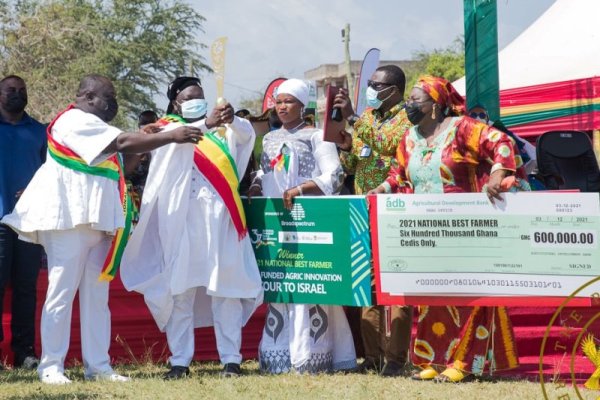 Cape Coast , Dec 04, GNA– “My avowed determination to work hard to improve the livelihood of my father and community has earned me this great award at the 37th Farmers Day celebration,” Alhaji Mashud Mohammed, the National Best Farmer, has stated.
The 44-year-old former teacher with Diploma in Education, told the Ghana News Agency that he had not regretted being a farmer, and a celebrated one at that.
Married with two wives and four children; two males and two females, Alhaji Mohammed said he quitted his teaching profession some 15 years ago and began farming on a four-acre land.
He has 850 acres of maize, 40 acres of groundnut, 43 acres of onions, 40 acres of sorghum, four acres of shea, 19 acres of tomatoes, 714 cattle, 640 sheep, 1,300 goat, 3,400 broilers, 7,185 guinea fowl, a fishpond of tilapia and catfish, and a host other livestock.
He received GHc600,000 from the Agricultural Development Bank, Ghc500,000 worth of insurance cover from GLICO, and an agriculture innovation tour to Israel, sponsored by Broadspectrum Limited.
“I am in a haste to grow in abundance because I have sacrificed so much to get to where I am today. My journey is characterised by hard work but with determination and God’s grace, I am the proud National Best Farmer today,” Alhaji Mohammed said with excitement.
Within a period of three years, the National Best Farmer, from the Mion District of the Northern Region, had supported 26,000 young men and women who needed the push to gain grounds in the agribusiness industry.
The benefits of this gesture could be felt in many communities in the Upper East, Upper West, Savannah, Northern and North East Regions.
The beneficiaries were supported to grow soybeans, maize, rice, cowpea and received in-depth training on best agricultural practices.
Alhaji Mohammed expressed joy for his decision to get majority of the youth into the agribusiness industry, stressing that it was as important as assisting government to strengthen food security and food systems in Ghana .
“We want to see so many youths coming into the sector, it is not a field for the aged or for the illiterate,” he said.
His 15 years of experience in rice farming had made him gain interest in promoting Made-in-Ghana rice and chicken to support economic growth.
That notwithstanding, access to finance, mechanisation, and irrigation had been challenging in the agribusiness sector, which needed government’s support to overcome, he said.
Other award winners were Sulemana Yidana, a farmer from the North East Region, and Reverend Samuel Sida from the Ahafo Region, who emerged first and second runners up, respectively.
Mr Yidana received a tractor, an insurance worth Ghc 200,000 from GLICO among other prizes, while Rev Sida had a Nissan Navara and the same insurance cover, among other juicy prizes.
Mr Kwaku Ehun from Gomoa West Central of the Central Region was the Overall Best Fisherman and would receive a two-bedroom house to be built at his preferred destination.
In all about 165 persons from the Agriculture, Fisheries and Cocoa sectors were awarded at the Grand Durbar held in the ancient city of Cape Coast on the theme: “Planting for Food and Jobs; Consolidating Food Systems in Ghana”.