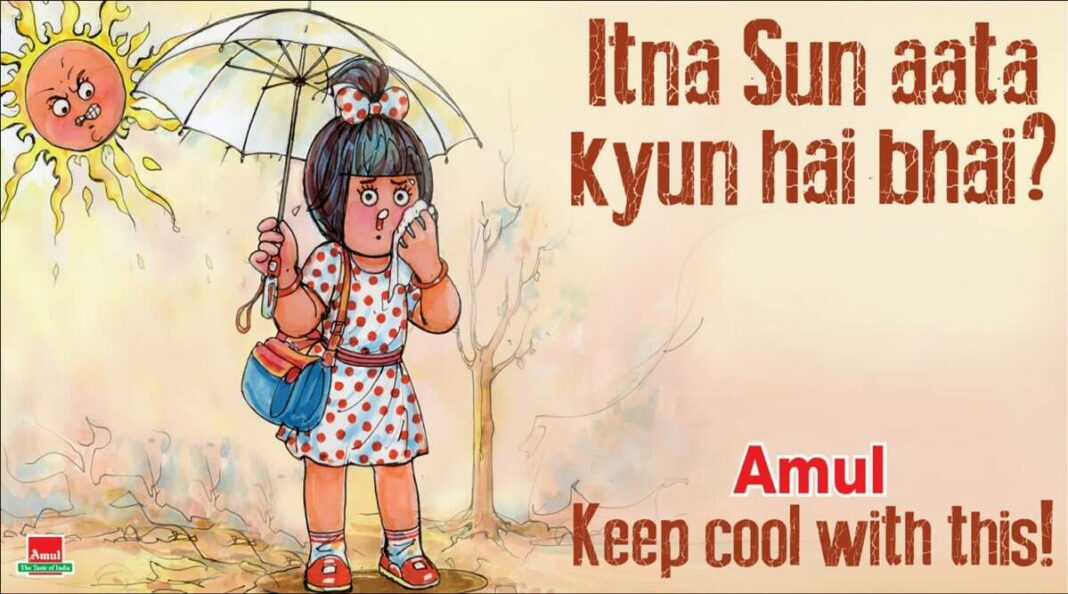 As scorching heat has been sweeping across several places in the country, people have been struggling to find a respite. While netizens shared memes on the heatwave, the diary brand Amul’s latest topical also reflected the sweltering situation.

The topical shows the Amul girl standing outside holding an umbrella and wiping sweat from her face. She seems disturbed by the intense heat from the furious sun and wilting grass and trees. The topical also had a quirky caption, “Itna Sun aata Kun hai bhai? Keep cool with this!”

Memes on the reeling heatwave have been flooding social media. Users have been coming up with funny posts showing people sitting inside a bucket full of ice cubes, bread getting burnt in the heat, and many more.

#Heatwave ☀️
Remember about them 🦜 too pic.twitter.com/7RyuGfLFNF

Heat wave in Kolkata…. Weather department issued notification regarding the same… And me feeling…#Heatwave pic.twitter.com/zywJu1zux2

Srk to the sun pic.twitter.com/TOC31pkkV1

Since the beginning of March, several parts of India have been reporting severe heatwave conditions. Meanwhile, the India Meteorological Department (IMD) said on Tuesday that the maximum temperature has decreased by two or four degrees Celsius over Rajasthan, Punjab, Delhi, and Haryana. Many places in West Rajasthan and Vidarbha had been recording more than 45 degrees Celsius during the last week.

The IMD has said that April this year was the third-warmest in India in 122 years and March was the warmest over the same period.