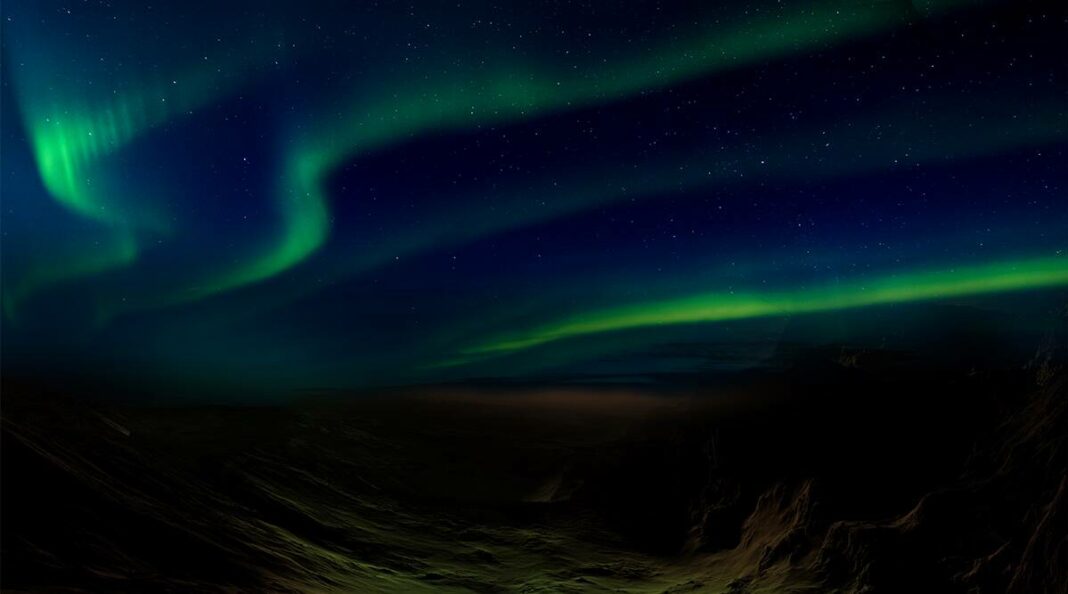 At first glance, it looks just like our own northern lights on Earth. But this aurora is over 55 million kilometers (40 million miles) away on Mars. And the researchers who spotted it say it is something quite extraordinary — even “shocking.”

The aurora was photographed by the Emirates Mars Mission (EMM) probe, Hope.

Soon after Hope entered its orbit of Mars, the probe started imaging the planet’s auroras. The researchers decided to focus more closely on the planet’s so-called discrete auroras than originally planned.

“We knew we had unveiled [a] potential to make observations never before possible on this scale,” said EMM Science Lead Hessa Al Matroushi in a statement.

Now, about a year later, the researchers say they have discovered a “huge, worm-like aurora that extends halfway around the Red planet” — one that has never been seen before.

They are calling it a “sinuous discrete aurora.”

Auroras tell us about Mars’ atmosphere

One of Hope’s main objectives has always been to gather data on Mars’ atmosphere. And the images of the auroras on Mars are shedding new light on the atmosphere’s interactions with the planet’s magnetic fields and solar wind.

The researchers say they want to provide data that will help the international science community create a global weather map for Mars, understand the planet’s weather cycles and track the movement of hydrogen and oxygen between the different layers of the atmosphere.

Al Matroushi said they can scan almost the entire globe, capturing “synoptic snapshots” — images that provide a full overview of the planet — which will enable the researchers to investigate those atmospheric phenomena.

“We are seeing discrete auroral effects on a massive scale and in ways we never anticipated,” said the scientist.

Other auroras on Mars

Scientists have previously detected three types of auroras on Mars.

First, there are diffuse auroras, which are produced by intense solar storms.

Second, there are the discrete auroras, which Hope has been investigating since the start of its mission. Discrete auroras are produced by magnetized minerals embedded in the planet’s crust.

Diffuse and discreet auroras tend to be observed on Mars’ nightside. That is the side of a planet that faces away from its star, and in Mars’ case, that is Earth’s sun.

Then there are proton auroras, which are observed on Mars’ dayside (the side facing the sun).

Proton auroras appear to be a product of interactions between Mars’ solar wind and hydrogen in the planet’s exosphere — the outermost layer of a planet’s atmosphere.

And now we have this fourth type of aurora on Mars — the sinuous discrete aurora.

The researchers say sinuous discrete auroras consist of “long worm-like streaks of energized electron emissions in the upper atmosphere.” And they extend many thousands of kilometers from the dayside into the nightside of Mars.

Rob Lillis of the University of California at Berkeley says they have made a “shocking discovery.” Lillis is part of a team behind Hope’s Emirates Mars Ultraviolet Spectrometer.

“[It] has us scratching our heads and going back to the drawing board. We have ideas, but no solid explanation for why we are observing intense aurora of this shape and at planetary scales. We now have the opportunity to re-examine prior observations and unpick what is happening here,” Lillis said in a statement.

The Emirates Mars Mission is the first of its kind to be launched by an Arab nation and one of three Mars missions that launched in 2020, including one by China.

Hope completes one orbit of Mars every 55 hours and captures a full planetary data sample every nine days. Its mission is expected to run at least another year.