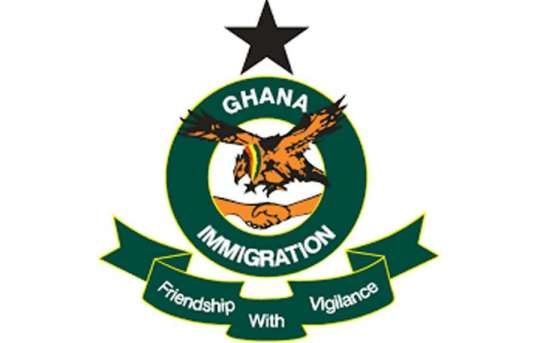 Logo of the Ghana Immigration Service

• Some nine Ghanaians were prevented from entering Burkina Faso

• The nine were using an unapproved route

Some nine Ghanaians have been prevented from entering Burkina Faso, through unapproved routes by officials of the Ghana Immigration Service (GIS).

According to Inspector Ibn Yussif Duranah Abdul-Mumin Seidu in a press statement published by myjoyonline, the nine, four males and five females, were informed about the COVID-19 directive by the president regarding the closure of the land borders, which is part of the measures used in combating the novel virus and the GIS officials educated the nine culprits on the dangers of using unapproved routes to and from Ghana.

Also, some 11 Burkinababes and a female Malian, who were coming into Ghana through unapproved routes were refused entry.

“The Ghana Immigration Service is determined to police the Upper West borders without let or hindrance. We call on the people of the Upper West Region to collaborate with state security agencies in the fight against the menace of irregular migration. Anyone who stands in our way in the fight against irregular migration shall be crushed,” the statement said.

“The vision of the Regional Commander is to make undocumented migration unattractive,” parts of the statement stressed.

Judge threatens to report witness to IGP over appearance