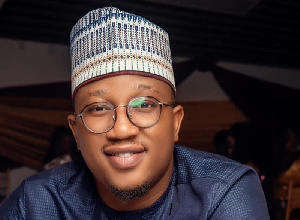 Hajia Adiza Braimah popularly known on social media as Kuburah Diamond has showered elaborate praises on her husband Baba Sadiq Abdulai who is Chief Executive Officer of 3Music, saying he has been the best man she could have ever wished for although they are both imperfect.

Her public praises come after the 3Music boss had a beef with self-styled dancehall King Shatta Wale who alleged as is usual of him that Sadiq was sleeping with ladies at the International conference center something happening his wife should check.

Sadiq has been heavily criticizing Shatta Wale in the past few days. He described the dancehall act as some who is “always making hollow arguments and running in circles”. Sadiq’s comment was to respond to a shade Shatta threw to people who invest in music videos.

“When I started out in the industry in 2004. Then Shatta was an underground artiste. When he re-emerged in 2013 I was programming/productions dir. At Viasat1 & my artiste had won the Reggae/Dancehall song & act of the year over him make e cause commotion so who is the aba fresh nu?” Sadiq tweeted.

But she had a quick rebuttal of her own:

You (we) are so not perfect but you are a MAN. You are a MAN because you have the heart of allowing your wife to also GROW side by side your GROWTH. It is more of let’s blossom together regardless our imperfections and shortcomings. Thanks for the all mentorship/ career guidance and intentional directions on building my Kuburah Diamonds projects and initiatives.

You followed me to the venue for the 3 Days training because you saw me leaving home looking worried sick because of my venue branding and other needs to ensure I have a successful @zangwoleap project.

You rescheduled a very important meeting just to pass by the venue to see me again and assure me to stay calm because no matter what it will end in praise. Indeed! It did, Zango Women Livelihood & Empowerment Programme, this year was over successful. For a moment, I thought I was dreaming but it happened LIVE just as I thought and planned it.

I earned your blessings because I am a very good (WIFE) oh Yes! No matter what, I respect you so easily I get your “husbandly” blessings in whatever I do or touch.