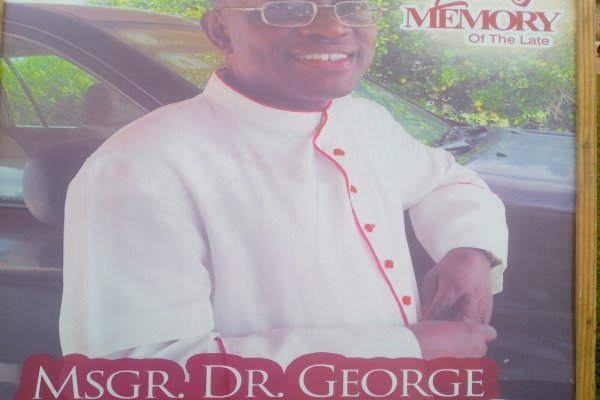 Sunyani, July 24, GNA – The Catholic Church in Ghana and the Catholic Diocese of Sunyani have indeed lost a great pillar following the demise of Reverend Monsignor Dr.

He described Rev. Msgr. Dr. Kumi, who until his death was the Vicar-General of the Sunyani Diocese since 2003 as great loss to the Church because he was a Christ-like life priest and a role model who did his best to be self-efficient.

Most Reverend Sarpong, Metropolitan Archbishop Emeritus of Kumasi eulogized Msgr. Kumi when he was giving the homily at his burial mass (church service) held at the Saints James and Patrick Basic Schools’ park, Christ the King Catholic Cathedral on Friday in Sunyani.

The service, con-celebrated by two Archbishops and about 10 Bishops with Most Rev. Mathew Kwasi Gyamfi, Catholic Bishop of Sunyani as the main celebrant was attended by Catholic faithful, both clergy, religious and the laity from all parts of the Sunyani Diocese and representatives from the entire 20 Dioceses of the Catholic Church in Ghana.

There was also a Catholic Bishop and his delegation from a sister Diocese in La Cote d’Ivoire and some head pastors and representatives of other Christian denominations in Sunyani and beyond, a representative of Sheikh Alhaji Umar Abdul Khadr, the Bono Regional Chief Imam, politicians and traditional rulers.

The former prelate of Kumasi Archdiocese said the late Msgr. Kumi, a man worthy of emulation had done his part and though was dead, his legacy would live forever.

He said Rev. Msgr. Dr. Kumi was highly analytical and peace loving, stating coupled with his dedication and selflessness as a priest, he demonstrated those qualities and virtues to impact positively on the society as a problem-solver and thus assisted in finding solutions to problems that came his way.

Most Rev. Sarpong stated Rev. Msgr. Dr. Kumi was receptive, principled, serviceable, workaholic and a friend of all who could calm tensions to neutralize volatile situations greatly demonstrated indiscriminate service to humanity.

He therefore advised particularly priests to live a model lives since, according to him a priest must imitate Jesus Christ, the Chief Priest who gave up his life for humankind through death on the cross as a means for Christians to enjoy eternal life after death.

Jesus emptied himself in order to do the will of His Father (God the Father), likewise the priests in doing the will of God, must also offer themselves by sacrificing their time, living Christ-like life, avoid the habit of preaching virtue and practicing vice to be able to make positive and tremendous impact on their people, Most Rev. Sarpong urged.

In recognition of his long and dedicated service to the Church, Saint Pope John Paul II on April 5, 2004 conferred on him the title of Monsignor and he held many positions at different levels and most of the time played simultaneous functions within the Diocese.

He was the Secretary-General/Coordinator of the first Diocesan Synod and Chairman of the Board of Directors of St. James Seminary/Senior High School (SHS) at Abesim, near Sunyani where as a former tutor, he taught General Science and Biology and a member of the National Theological Commission.

Rev. Msgr. Dr. Kumi, between 1990-1991 studied at St. John’s University, New York, USA and obtained Master’s degree in Theology with “a Perfect 4.0 Index” and was a Teaching Assistant at that University.

From 1991-1996, Rev. Msgr. Dr. Kumi studied at Fordham University, New York and obtained a Doctorate degree in Systematic Theology and during that time assisted in the Pastoral Ministry of St. Lawrence O’Toole Church in the Archdiocese of New York.