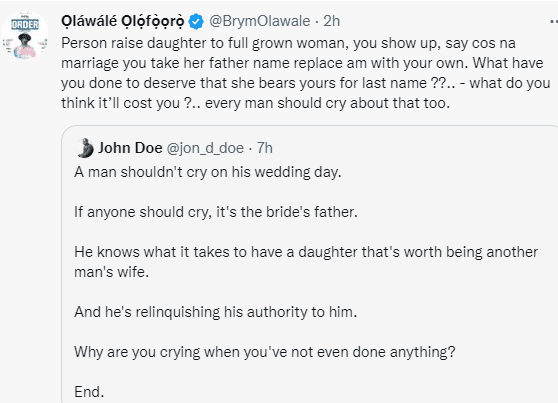 Popular Nigerian singer, Brymo, has opined that every man should cry on their wedding day.

Brymo who goes by the real name, Olawale Olofor gave the reason while countering the opinion of a Twitter user, who argued that men are not supposed to cry on their wedding day.

The Twitter user wrote, ”A man shouldn’t cry on his wedding day. If anyone should cry, it’s the bride’s father. He knows what it takes to have a daughter that’s worth being another man’s wife. And he’s relinquishing his authority to him. Why are you crying when you’ve not even done anything? End.”

Replying him, Brymo wrote, ” Person raise daughter to full grown woman, you show up, say cos na marriage you take her father name replace am with your own. What have you done to deserve that she bears yours for last name ??.. – what do you think it’ll cost you ?.. every man should cry about that too.”

Brymo clamoured for the support of Bola Tinubu to emerge the Nigerian president come 2023.

Tinubu is a former governor of Lagos State, national leader and presidential aspirant of the All Progressive Congress (APC).

The music star took to his Twitter page on Tuesday, May 31, 2022, where he gave reasons why Tinubu is the best candidate to rule the country.

“Yet… he’s the one with a plan, we all know that… Let a city boy be president for once!.. never met the man, or anyone who represents, or is acquainted to him, or even his relations and political affiliates – and if we stopped trying to kill them off for being old,” he replied a follower.

As his tweet began to gain engagement on the social media app, the singer continued to give justifications as to why the politician’s candidature was the best bet.

“About having a Plan; You live in what town ?.. I live in Lagos. Yh! City Boy. It is like Lagos moving into Aso rock, it is guaranteed to work!.. even if looting is rife it’ll still be the best presidency yet. On God!” he replied another follower.