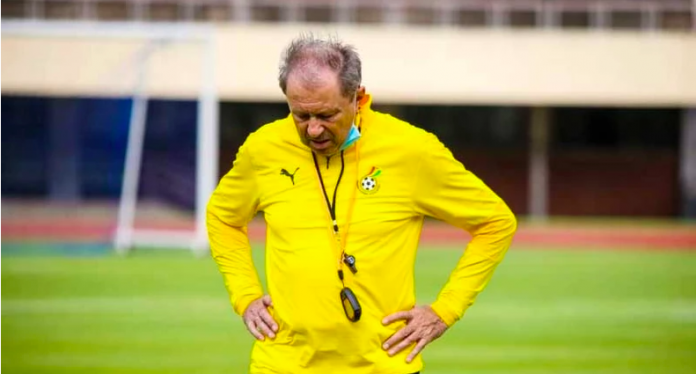 The Black Stars’ last group stage game is against Uruguay, and former coach Milovan Rajevac has urged his former team to maintain concentration.

Tonight at Al Janoub Stadium, the Black Stars will play against a South American team.

Many football fans have urged the Black Stars to get vengeance on Suarez for stopping Dominic Adiyah’s goal-bound header with his hands in South Africa 12 years ago.

In an interview with AKoma FM, Rajevac said that vengeance was not an important problem.

He suggests that Ghana forget about their previous loss and treat their next encounter against Uruguay as if it were a whole new experience else revenge mentality would make them ( Black Stars) lose.

“I believe Ghana should leave the past in the past regarding the Uruguay game and take the match against Uruguay as any other match,” the Serbian trainer said.

READ ALSO: Video:If there’s a straight WIN in the game, it will be Uruguay – Angel FM journalist

“It was a tragic memory for all of us but anyway, we made all of Africa at that time, so we should learn from that experience and use I for future challenges.

“They should stay focused and determined to win, because every next match is the most important match,” Milovan Rajevac said.

Ghana’s encounter against Uruguay is scheduled to kick off today at 15:00GMT. The Black Stars need a win or draw to make it to the next round of the tournament.