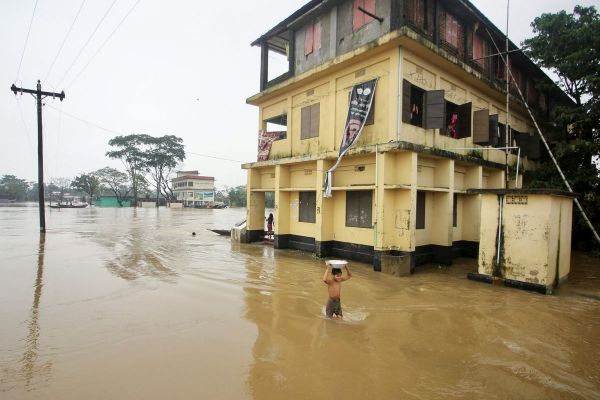 Four days of torrential rains have caused havoc in Akyem Oda in the Eastern Region.

The rains led to flooding in many parts of the town, destroying over 100 houses and rendering more than 400 people homeless.

Some of the victims are currently putting up in classrooms, while others are staying with relatives, friends and sympathisers.

The Member of Parliament (MP) for Oda, Alexander Akwasi Acquah; the Birim Central Municipal Coordinating Director, Haruna Amadu; the Oda Constituency executive of the New Patriotic Party (NPP) and staff of the National Disaster Management Organisation (NADMO) visited the disaster victims and inspected the extent of damage to properties in the area yesterday.

The MP donated relief items, such as student mattresses, plastic buckets and bowls, as well as mosquito nets and mosquito coils, to the victims.

He also provided some of them with breakfast.

The Oda Zongo Chief, Alhaji Sulemana Adamu, and the Assembly Member for the Kyeremim Number Two Electoral Area, Nuhu Ayara, conducted Mr Acquah and his entourage round the damaged buildings.

Addressing victims of the disaster at Oda Zongo, who were the worst hit, Mr Acquah assured them of the government’s preparedness to assist them repair their damaged buildings.

He attributed the flooding of the area to the Birim River which overflowed its banks as a result of the many days of continuous rainfall.

The MP advised the people to desist from dumping refuse into gutters, saying that was a contributory factor to flooding.