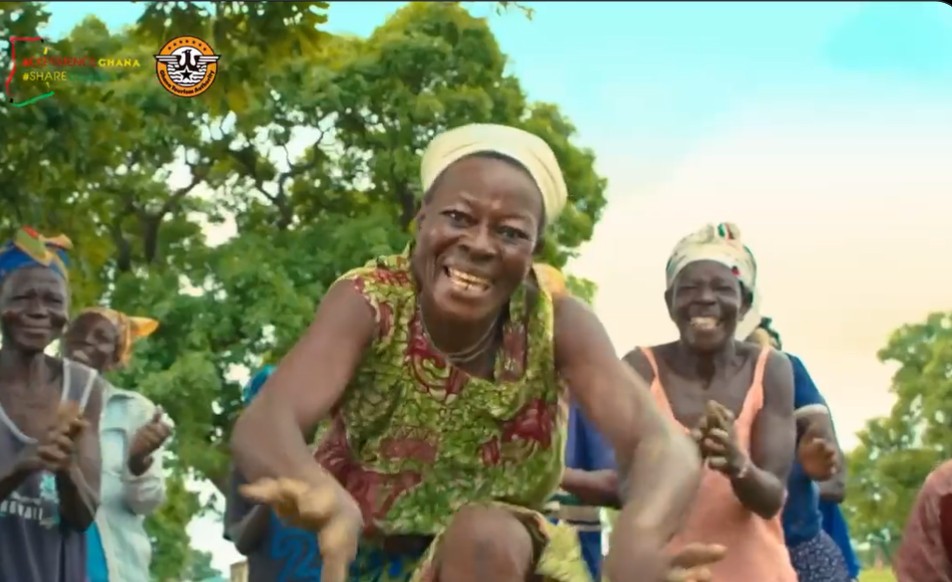 This footage, which is originally from the ‘Guda’ music video, features in video promoting tourism

The design company which the Ghana Tourism Authority (GTA) revealed gave them footage to use for their promotional video, has finally broken its silence.

In a press statement, Samsal denied giving the Authority the go-ahead to use a mood board – a type of visual presentation or ‘collage’ consisting of images, text and samples of objects in a composition – containing Kirani Ayat’s video.

According to the company, the video reel they showed the GTA was only to give them an example of the type of content they intend to produce for the Authority as part of their agreement.

“For the avoidance of doubt, the video which the President and the GTA have put in circulation is not the mood board we created.

“It contains snippets from the mood board. However, we never authorised the GTA to publish the mood board or any scenes from it,” Samsal noted in a statement on Wednesday.

They added that the MoU signed between them and the Authority explicitly indicates the company produces new content – with the mood board as inspiration – which would be financed by the GTA.

“Unfortunately, the GTA did not finance the creation of any new work as agreed. Using our own funds, we created our own video to promote Discovery Bands and submitted same to GTA.

“The GTA has not posted the Discovery Bands video (which also depicts lovely scenes from Ghana and which we worked with David Nicol-Sey to shoot) nor has it fulfilled any of its content financing obligations under our MoU.”

The company stated that it came as a surprise to them when they noticed that content from the mood board has been repurposed and put into circulation by GTA.

Beneath the deep blue sky, the Black Star is calling. Follow the stars and let them take you on a journey of our people. I invite everyone to the country at the centre of the world – #Ghana 🇬🇭. #VisitGhana2022 pic.twitter.com/2m5KC2QTkt

This comes after the Ghana Tourism Authority revealed they acquired the footage for the now viral tourism video legitimately.

The CEO Akwasi Agyeman revealed that design company Samsal is the agency that supplied them with videos.

Opening up on how the Authority got the video, he explained that at the height of the Year of Return in 2019, Samsal reached out to his outfit for help.

Mr Agyeman stated that when he questioned what the Authority would get in return, the agency’s representative showed him videos they claimed to own and was ready to hand over to the authority to push the Ghana tourism agenda.

The GTA CEO said that an MoU was signed and the footage were handed over. They have been in use since 2019 helping the agency promote tourism including the ‘Visit Ghana, Eat Ghana and Wear Ghana’ campaign.

But Samsal insists they did not give GTA the right to use the video reel they provided, yet the Authority pushed ahead with it instead of fulfilling its obligations under the MoU by providing the company with logistic and budgetary support for the creation of similar contents to market Ghana.

“It is therefore untrue that our agency authorised the GTA to use Ayat’s video. The mood board was never part of our delivery obligations under the MoU, which all parties knew at all material times was for demonstrative purposes only,” Samsal explained.

They added that “we have contacted the GTA regarding the damage the ongoing narrative is doing to our brand as creatives. All our legal rights are reserved.”

Background to the copyright feud

On Tuesday, September 27, musician Kirani Ayat called out the Tourism Ministry for using excerpts of his footage in a new promotional video without his consent.

The video shared on President Akufo-Addo’s Twitter page featured different scenes from different parts of the country and a voice-over by the President encouraging tourism.

In the video were also shots from the VGMA and 3Music Awards nominated video for the song ‘Guda’ released in 2018 by Kirani Ayat showcasing scenes from the north.

Kirani Ayat who was not pleased to see his work used without his consent noted that he spent his all in making the video without aid from anyone and yet he was not compensated after his content was used.

“The president of Ghana has used my video “GUDA” in this ad to promote Ghana. I was actively reaching out to the Ministry of Tourism in 2018/19 to use this video to push tourism in the North and got NO reply, yet today it’s in an ad and no one reached out to me for permission,” he wrote.

But reacting to the musician, the Ghana Tourism Authority, dismissed claims that some footage used for the new tourism promotional video which features President Akufo-Addo was pirated.

In a press statement, the Authority stated that they procured the footage Kirani Ayat is claiming ownership of legitimately from a creative agency in 2019 as part of a project.

They however added that despite their stance, they have reached out to the agency to deal with the issue after Kirani Ayat aired his concerns.

Kirani Ayat replied to the Ghana Tourism Authority stating that he has not given any agency the right to his intellectual property or given approval for any agency to use his content.

But Mr Agyeman is unhappy that Kirani Ayat called out the President and the Ministry of Tourism publicly on social media.

He stated that the ‘Guda’ hitmaker could have reached out to the Ghana Tourism Authority to get the issue sorted out when he recognised his content had been used.