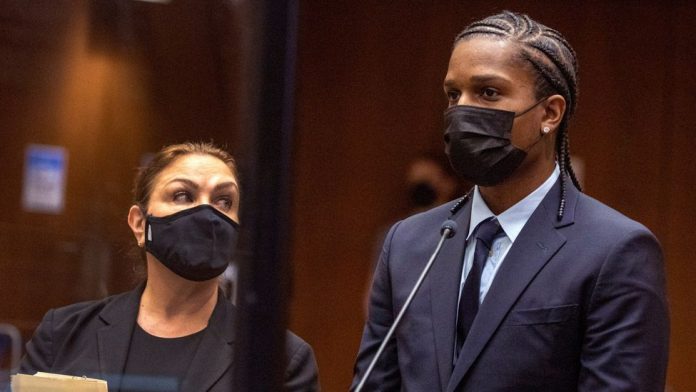 Rapper A$AP Rocky has pleaded not guilty to two charges of assault with a firearm in connection with a shooting in Hollywood last November.

The star, real name Rakim Mayers, is alleged to have pointed the gun at a former friend during an argument.

The rapper, who had a baby with singer Rihanna in May, appeared in court in Los Angeles on Wednesday.

The star was arrested at Los Angeles International Airport in April, as he returned from a holiday with Rihanna. He was released three hours later – after posting bail of $550,000 (£421,000).

Terell Ephron, who is part of the A$AP Mob hip-hop collective, identified himself as the victim and took legal action against his former friend last week – alleging assault and battery, negligence and emotional distress.

Mr Ephron, known as A$AP Relli, alleged that Mr Mayers had “lured” him to an obscure location in Hollywood to discuss a disagreement.

At Wednesday’s hearing, judge Victoria B Wilson put a restraining order in place, ordering Mr Mayers to stay 100 yards (91m) away from Mr Ephron at all times, and set a preliminary trial date of 2 November.

As A$AP Rocky, he was one of the biggest breakout stars of the 2010s, earning eight platinum singles in the US, including Wild For The Night, Everyday, LSD and A$AP Forever.