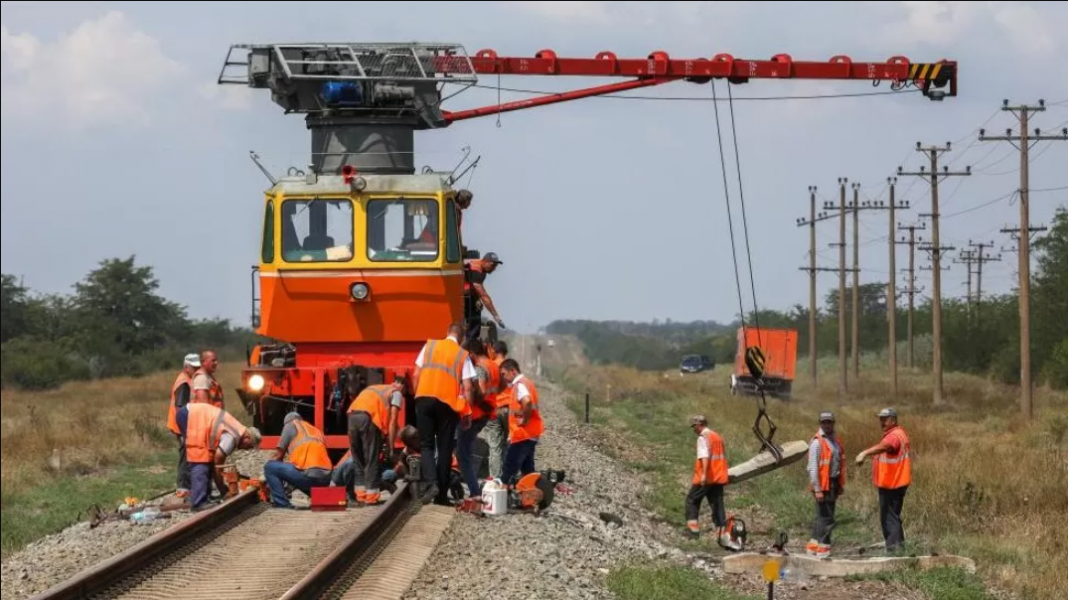 A week after an apparent Ukrainian attack on a Russian military base in occupied Crimea, an arms store at another military facility has been hit by a series of explosions.

Russian officials said a fire triggered the blasts in the Dzhankoi area, before blaming “sabotage”.

A separate fire broke out at a power sub-station and a railway was damaged.

A string of blasts last week destroyed Russian warplanes at a Black Sea base on the Crimean coast.

Ukraine has never publicly admitted that attack – but presidential office adviser Mykhailo Podolyak described the latest incident as “demilitarisation in action”, indicating that the explosions were not accidental.

A Ukrainian air force command spokesman said the base was used by some of Russia’s military helicopters, but blamed the blasts on Russia failing to observe fire precautions.

Russia gave no indication of the kind of sabotage involved in Tuesday’s attack, but the FSB security service said Ukrainian saboteurs had also blown up six electricity pylons this month inside Russia itself.

The attacks in the Kurchatov area, about 100km (60 miles) from Ukraine’s north-east border, had affected the “technological process of functioning” of the Kursk nuclear plant, it added.

Russia’s defence ministry said Tuesday’s explosions in northern Crimea took place at a temporary ammunition storage site on a base near the village of Maiske at about 06:15 Moscow time (03:15 GMT). A Crimean Tatar leader, Refat Chubarov, called the explosions a “hit” that could be heard “far across the steppe”.

The defence ministry in Moscow said there had been no “serious” casualties, but Russian-appointed regional head Sergei Aksyonov visited the site and said 2,000 people had been moved from a nearby village and two people had been wounded.

“One man has a shrapnel wound and one was crushed by a wall. Their lives are not in danger, fortunately,” he said.

Crimea was seized from Ukraine and then annexed by Russia in early 2014. When Russian forces unleashed a new invasion in February, they used their bases on the peninsula to capture large swathes of southern Ukraine.

Russian occupation has stretched across two southern regions in particular, Kherson and Zaporizhzhia, and Ukraine has vowed to launch a counter-offensive to recapture areas under Russian control.

After the Russian air base at Saky was hit last Tuesday, satellite images revealed significant damage, with at least eight warplanes destroyed. Although Russia said that incident was also accidental, there was little doubt the base had come under Ukrainian attack, because of the precise nature of the destruction.

The UK Ministry of Defence said the blasts had “significantly degraded” the aviation capability of the Russian navy’s Black Sea fleet.

The latest blasts in northern Crimea are reminiscent of a string of recent attacks behind Russian lines in eastern Ukraine.

Since June, Ukrainian forces have used US Himars multiple rocket launchers to hit as many as 50 arms stores, according to the defence minister. Bridges in the south have also been hit, jeopardising vital supply lines from Crimea to Kherson.

However, Russian media have suggested that drones are more likely to have been used in Crimea than missiles. The Kommersant website reported that a Russia military airbase also came under attack further south in Crimea on Tuesday, at Hvardiiske near Simferopol, possibly from a small drone.

The apparent ability of Ukraine’s military to reach so far behind enemy lines is of significant embarrassment to the Russians. The explosions at Saky were visible from nearby beaches, while videos posted afterwards on social media showed streams of tourists leaving Crimea, across a bridge built across the Kerch Strait after the Russian annexation.