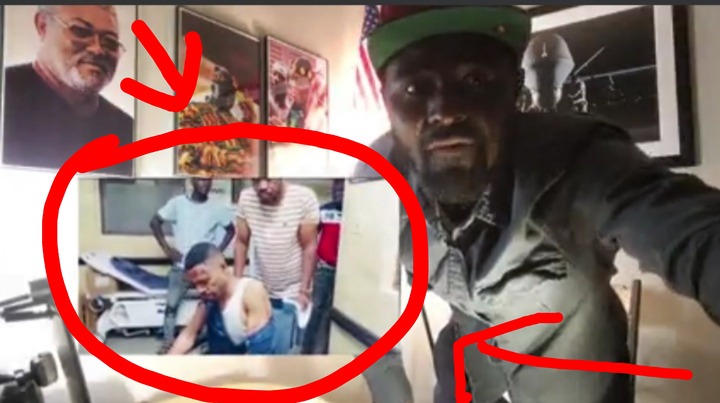 Mmrantiehene showed some pictures of the incident to derive his own conclusion. He explained that, contrary to the widespread allegation that Kofi Adoma Nwanwanii was butchered and nearly set ablaze, the marks on him doesn’t look like cutlass wounds. They are just some small lines which could be done with the scratch of an overgrown finger nails.

“Kofi Adoma Nwanwanii would have come live to explain exactly what happened. Have you heard from him? That’s another evidence that everything was staged. If Kofi Adoma Nwanwanii insist, I’ll expose him the more” Mmrantiehene boldly alleged in his revelation.

” Kofi Adoma Nwanwanii is the only person to explain his motive for bringing this fear and panic. As popular as he is, have you heard anything from the Ghana Police Service ? We were all here when we heard that Shatta has been shot. What came out of it ? Wasn’t it a lie? I told Ghanaians that it was a lie but I was insulted. Let me insist that Kofi Adoma Nwanwanii is lying and I know what I’m actually saying” Mmrantiehene added.

Yesterday different fragments of news about Ghanaian journalist Kofi Adoma Nwanwanii popped up. Ghanaweb initially reported of armed robbery attack on him. They later changed their caption to an alleged assassination attack. Some National Democratic Congress communicators also twisted the story as a political witch hunting. “

Political witch hunting? Even Captain Smart who keeps insulting government appointees is walking a free man.” Some communicators of NPP also fired back on Facebook. “What hot and insulting political discussions does Kofi Adoma Nwanwanii lead. He is decent?” They added.

There were those who also accused his former wife as someone who may know something about the attack. With that, there is no evidence. Anyway, Mmrantiehene says Kofi Adoma Nwanwanii is lying. Let’s all wait for Kofi Adoma’s first public interview on the matter.

You can click on the link below to watch Mmrantiehene making out his points against the journalist Kofi Adoma Nwanwanii.