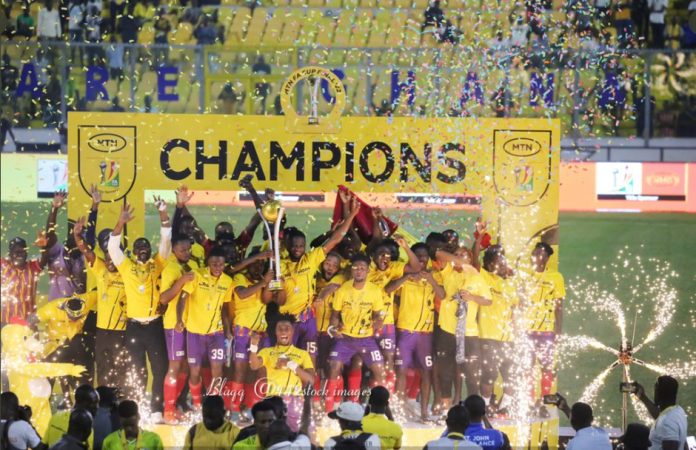 Hearts of Oak came from behind to defend their MTN FA Cup title against Bechem United at the Baba Yara Sports Stadium on Sunday night.

The Phobians recorded a 2-1 win over the Haunters.

Emmanuel Avornyo scored the opener but goals from Caleb Amankwah and Daniel Afriyie Barnieh turned the tie for the Phobians to defend their title successfully.

Hearts of Oak were put under pressure and were forced to play at the half in the early stages of the first half.

The first goal of the game went to Bechem United in the 45th minute. A brilliant long ball from Latif Anabila found Augustine Okrah who forced a save from Ayi but Avornyo was there to knock the ball in off a rebound.

Three minutes later, Hearts of Oak got their answer through a set-piece. A pinpoint cross found Caleb Amankwah who tried the spectacular which easily beat the opposition goalkeeper to level matters just before the halftime whistle.

In the second half, Hearts of Oak showed more drive and were rewarded with their first lead of the game in the 61st minute.

The night got worse for Bechem United as star man Augustine Okrah was sent off in the 67th minute.

Hearts were able to hold on from there to clinch the title. It is Samuel Boadu’s second FA Cup trophy in succession after leading the side to the crown in 2021.

The victory means that the Phobians will now compete in the CAF Confederation Cup qualifiers.

They will now renew the rivalry in the Super Cup when they play against Asante Kotoko.