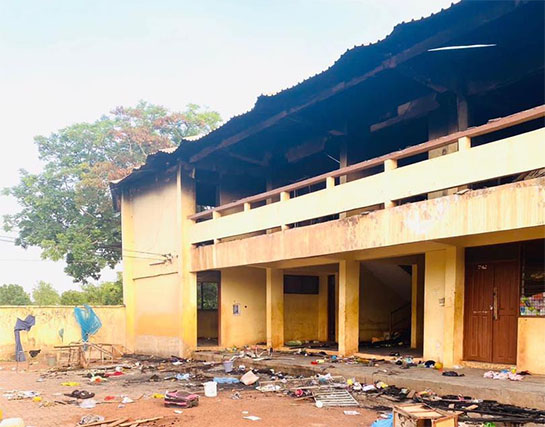 It has emerged that an electric heater is the cause of the fire outbreak at the Tolon Senior High School girls dormitory in the Tolon District of the Northern region.

The Northern Regional Public Relations Officer of the Ghana Fire Service, ADOII Hudu Baba who confirmed this to journalists said preliminary investigations revealed that there was an electric heater plugged in one of the dormitories which they suspect could have caused the fire.

“There was an electric heater that was connected to a plug and in a cup of which the cup melted and so this is an indication that maybe a student was heating something and left it in the dormitory but we are still investigating to come up with the cause of the fire.”

He advised students in boarding schools to desist from coming to school with electric heaters to avoid such fire outbreaks.

“You don’t need to boil water for tea, bathing, or anything of that sort whatever you need just ask the authorities so let’s take safety precautions and measures seriously.”

ADOII Baba urged various Senior High Schools authorities to desist from putting in plugs at various dormitories in their schools except for bulb switches and fans.

“Anything like plugs should not be allowed to be put in the dormitories to be used to plug heaters, cookers, or anything to prevent any fire outbreak.”

The girls’ dormitory of the Tolon Senior High School in the Tolon District of the Northern region was gutted by fire on Thursday, May 19, 2022.

The fire outbreak burnt the top floor of the girls’ dormitory.

The fire destroyed school uniforms, chop boxes, mattresses, and books among other learning materials belonging to the students.

Meanwhile, the Headmaster of the Tolon Senior High School, Armed Yussif, indicated that the incident has been reported to the Northern Regional Education Director, the school’s Parent-Teacher Association, and other stakeholders to find ways to accommodate the displaced students.