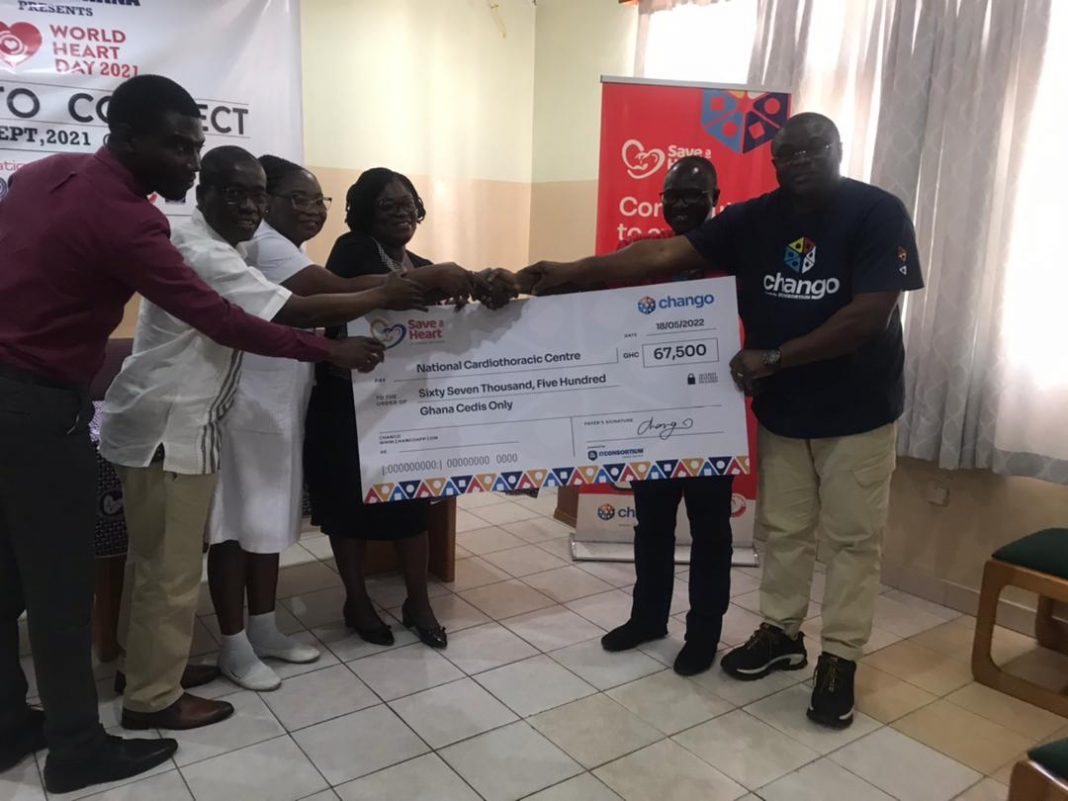 IT Consortium, one of Ghana’s premier Fintech companies, has used its Chango app, a crowdfunding platform, to raise an amount of GHS67,500 cedis in support of the National Cardiothoracic Centre at the Korle Bu Teaching Hospital in Accra.

The Chango app, which is available on the PlayStore and Apple Store, allows individuals and organizations to create private or public groups to raise funds for predetermined campaigns. Chango has thousands of active users, and there are hundreds of private and public groups already using the platform for fundraising.

Two key public fundraisers on the app when it was launched, were one for victims of the Keta-Ketu South-Anglo tidal waves, and one for the Korle Bu Cardiothoracic Center that has raised the amount of GHS67,500 to support heart surgeries.

The Cardio fundraiser, dubbed ‘Save a Heart’, is a collaboration between the center and IT Consortium to raise a million people to regularly support children with hole in heart.

“The goal is to remove the funding barrier to anyone seeking hole in heart surgery,” CEO of IT Consortium, Romeo Bugyei said.

“We want to use this opportunity to encourage many more people to get onto this and by kind courtesy of IT Consortium, it has become easier to donate to the cardiothoracic centre now, and you do not have to worry about the amount you are going to pay.”

“Maybe you think the amount is too small, but every little cedi you can give us is good enough for us, all you have to do is go to the Chango app and make your donation,” he said.

He further indicated that the centre receives over a hundred heart disease cases monthly, hence they need more support. 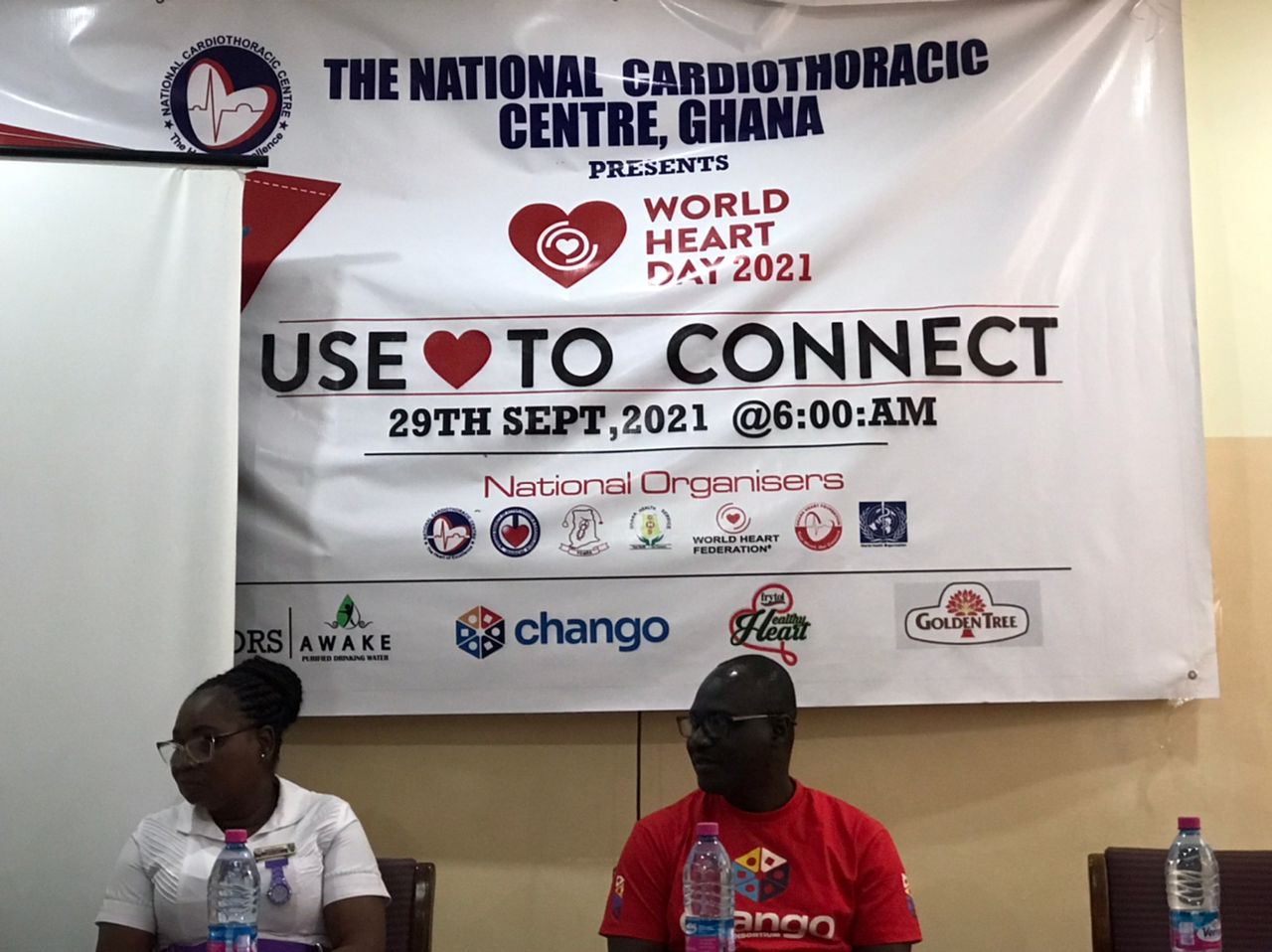 Speaking to Citi News, the Chief Executive Officer of IT Consortium, Romeo Bugyei, explained the motivation behind the organisation’s support.

“A lot of people may be wondering why Cardio and not any other entity or unit of Korle-bu or elsewhere, but for us as an institution, we have some emotional attachment to Cardio because one of our own happened to be here and the support that was given him, the care that was given him, and as he looked around he realized that this is something we can also partner to be able to encourage more people.  So after doing a lot of investigation, we recognized that although people are supporting, individuals are not pulling that much. So aside from the platform that can be used by every unit in Korle-bu or elsewhere, we have a special attachment to cardio,” he said.

He further urged people to contribute to the course of the cardiothoracic centre.

More about the Chango App

There are a good number of old-school groups, social clubs, hospitals, churches, and NGOs using the platform to raise funds within both private and public groups. Private groups are groups created and managed by any person on the Chango app, while public groups are groups created by a corporate institution that is duly registered and has a registered bank account in a commercial bank. According to Mr. Bugyei, the public group feature is mainly targeted at governmental or non-governmental organizations. 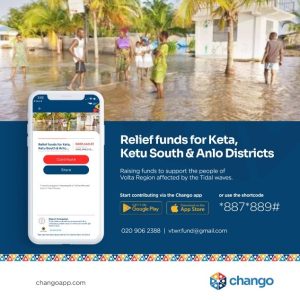 Chango offers a collective point/avenue to put funds together using either mobile money or bank cards. According to Mr. Bugyei, for private groups, each individual is allowed to contribute up to GH¢2,000 per day, while for a public fundraiser, each person can contribute as high as GH¢20,000 per day. Unlike mobile money, which has limitations on how much a wallet can hold, depending on the status of the wallet, Chango does not place any limitations on how much one fundraising campaign can raise, and all the money donated goes into a bank account.

It also has a feature that allows funds to be cashed out with just a few steps. The cashout recipient can be categorized into ‘Self’, ‘Member’ and ‘Non-member’ of the group, and cashout can be received via either mobile money or bank account. The app also allows a member of a group to borrow funds from the group just like it’s done in the traditional susu settings. However, this request has to be approved by the loan approvers of the group before the funds are released. And funds borrowed can be repaid by contributing to the group or campaign from which the funds were borrowed.

It also has a voting system, where group members are able to vote to agree or disagree with the management or use of the group funds. There is a Group Chat feature which enables group members to hold discussions within the app, without needing another messaging app to facilitate communications. The app provides group and personal statements of account to enable proper monitoring of funds and easy reconciliation of records.

According to IT Consortium, Chango is designed with capabilities to enable a wide range of users to create enclosed groups to make contributions to any predetermined cause.

The categories of groups that will find Chango useful include Alumni or old school groups for collecting dues, or raising funds for celebrations, parties or even for a project; families can also use to contribute funds to pay school fees, and child support, organize funerals among other things.

Meanwhile, some categories of users like NGOs, support groups, alumni or old school groups, government organizations like NADMO and churches, can also create public groups, which are open to every user to contribute to a cause. They do not have to limit contribution to a few group members like in the case of private groups.

For one, Chango is free to use, and a management portal is assigned to all public groups to manage their own fundraising activities. The chat feature within the Chango app gives users the convenience to hold discussions and the voting and personal statement feature create transparency because it provides clear records of contributions and cashout transactions. “Every activity of a user is clearly stated along with a timestamp,” Mr. Bugyei added.

The app also assures users of security because all card and other payment details are encrypted.

Mr. Bugyei emphasized that Chango “employs the 128-bit Secure Socket Layer (SSL), which is one of the strongest encryption technologies most commonly used by large-scale online merchants, banks, and brokerages worldwide. All online sessions are protected by up to 128-bit encryption, which best protects your information against disclosure to third parties.”

Chango is currently only internet-based and can be used in any country, but cashout can only be made in Ghana and Kenya for now.