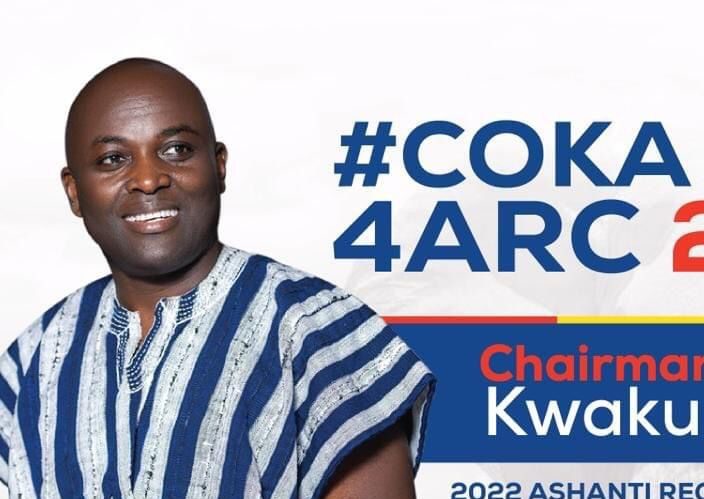 An aspirant for the Ashanti Regional Chairmanship position of the governing New Patriotic Party (NPP), Odeneho Kwaku Appiah, popularly called COKA has officially filed his nomination for the upcoming polls.

Mr. Kwaku Appiah, who is a former constituency chairman of the NPP in the Afigya Kwabre South, has intensified his campaign to occupy the chairmanship position.

He is seen by many in the party as a hardworking leader and a unifier who can work to transform and carry all members along as the NPP targets to break the eight-year term cycle in the 2024 general elections.

A campaign team member of Mr. Kwaku Appiah, Keskin Owusu Poku who filed the nomination on behalf of the aspirant on Monday, described the process as smooth.

He explained that Mr. Kwaku Appiah was the change NPP members in the Ashanti Region were yearning for since he has contributed to successes the party chalked at both the constituency and regional levels.

He added that “Whatever the processes are, we are ready to submit ourselves to the rules of the game, and we are hopeful that at the end of the day, once we go to the polls to vote, we hope that Chairman Odeneho Kwaku Appiah is elected a regional chairman of Ashanti Region”.

Mr. Owusu Poku indicated that the aspirant believed in the unity of the party and was ready to do whatever he can to ensure everyone in the party was brought on board in securing victory for the NPP in future elections.

He emphasized that COKA, which means Chairman Odeneho Kwaku Appiah, was a family man who does not discriminate or look down upon any member of the party.

He also expressed confidence in Mr. Kwaku Appiah winning the elections insisting that the aspirant’s message has gone down well with the delegates following the positive feedback the team received so far.

“We believe that once people hear the kind of message that he is carrying if they are going to vote strictly based on the message, then trust me I think Odeneho Kwaku Appiah is going to win,” he said

Ashanti Regional Minister, Simon Osei Mensah, who is chairman of the election committee, said the committee will be fair in discharging its duties.

He however appealed to the aspirants to refrain from politics of insults and do a decent campaign.