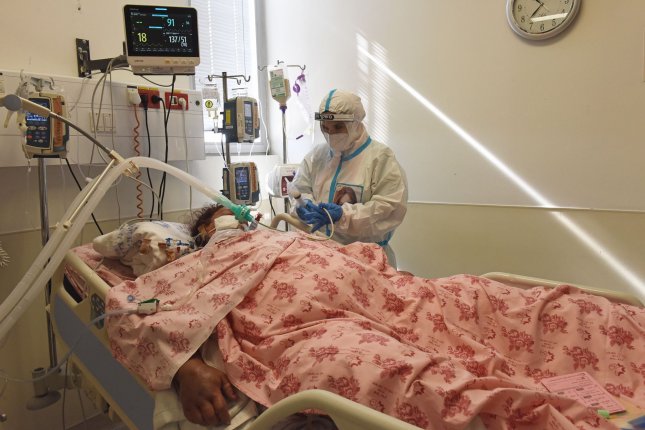 Patients with severe COVID-19 treated with blood oxygenation therapy appear to have a good chance for surviving the disease, according to a new study. File photo by Debbie Hill/UPI | License Photo

Among 30 patients treated with extracorporeal membrane oxygenation, or ECMO, 28 survived their disease and 27 were discharged home or to a rehabilitation facility to continue recovery, the data showed.

None of those who recovered left the hospital needing a ventilator of supplemental oxygen to maintain breathing, the researchers said.

“Our work suggests that with appropriately selected patients and aggressive management strategies, the use of ECMO support for severe COVID-19 can result in exceptional early survival,” study co-author Dr. Deane E. Smith said in a press release.

“These patients who leave the hospital without the need for oxygen therapy are very likely to remain alive and well one year later,” said Smith, a cardiac surgeon at NYU Langone Health in New York City.

With ECMO, a patient’s blood is pumped out of the body and into a heart-lung machine that removes carbon dioxide and sends oxygen-filled blood back. The treatment allows the blood to bypass the heart and lungs, giving the damaged organs time to rest and heal, according to the Mayo Clinic.

It is typically used in critical care situations, when the heart and lungs have been damaged, as is the case in many people with severe COVID-19.

Previous studies have shown that ECMO is effective in patients with severe illness from the virus, but it has been viewed as a “last ditch” option.

For this study, Smith and his colleagues identified 415 patients admitted to the intensive care unit at NYU Langone Health due to COVID-19 between from March 10, 2020, and May 1, 2020.

Of these patients, 30, or 7%, received venovenous ECMO, which involves the use of an advanced life support machine that takes over the function of damaged lungs, the researchers said.

Of all patients included in the study, 323, or 78%, were intubated for mechanical ventilatory support, according to the researchers.

However, intubation can damage the lungs further and “create a vicious cycle” for patients with severe lung disease or damage, Smith said.

Up to one year after the ECMO patients received the treatment, 26, or 87%, survived, including one who underwent a lung transplant, the data showed.

In addition, most of the survivors performed well on tests designed to measure lung capacity and breathing capability, the researchers said.

“We learned that lung recovery was actually possible,” Smith said.

“When the pandemic started, that was not clear,” he said.