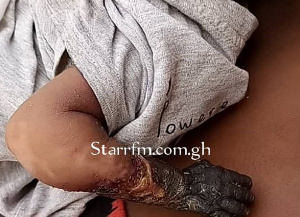 The St. Dominic Hospital in Akwatia has rejected accusations of medical negligence by the family of the little child who is on the verge of losing his hands as a result of a condition.

According to the hospital, their advice on treatment of the condition was initially rejected by the family when it was brought to their attention.

“The baby (second twin), together with his brother, a set of twins delivered pre-term at the hospital in August 2020 was admitted to the Neo-Natal Intensive-Care Unit (NICU) for medical reasons.

“Upon recovery from the NICU, the baby was sent to Kangaroo Mother Care (KMC)) to gain weight and was fully discharged after about two months.

The statement further explained: “After about 5 months later when the father and grandmother brought the twins to the hospital for assessment, no marked improvement was detected in the condition of both babies; and the said persons who brought them to the hospital this time attributed their conditions to causes that cannot be related in this release for good reasons.

“While performing routine protocol in the administration of medical care to the baby in December 2021, it became necessary to undertake an ultrasound scan on his hand which resulted in the detection of another medical condition for which the hospital prescribed a treatment. The mother once again rejected the advice”.

Nonetheless, the hospital said it continues to manage the condition of the child.

“The hospital continued to manage the baby’s condition and upon his discharge the mother was to bring the baby for weekly review until she together with a number of family members and a journalist stormed the hospital and demanded for a meeting.

“The hospital has finally succeeded in securing the consent of the baby’s parents to undertake the recommended medical procedure on him and we cannot but deploy our best efforts for the purpose for the baby to enjoy his normal health by the grace of God”.