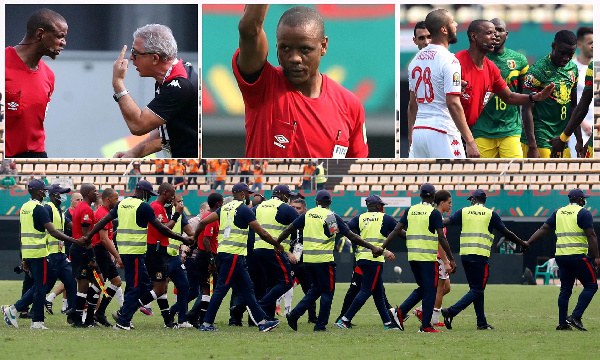 The good image of the 33rd edition of the Africa Cup of Nations suffered a dent in the public eye as the game between Tunisia and Mali ended in a bizarre way and left many unanswered questions on the minds of many.

The conscious efforts of African journalists aimed at projecting the Africa Cup of Nations as the best continental tournament suffered a setback due to referee Sikazwe’s strange decisions.

Janny Sikazwe, the referee who officiated the 2017 AFCON final between Egypt and Cameroon became the point of Tunisian anger and global humiliation after stopping the game twice, first on the 85th minute and then on the 89th minute.

Though this is not the first time a referee had ended a game prematurely in the history of football, GhanaWeb takes a look at how some of the big media outlets in the world captured the stories in their headlines.

Below are the headlines of the aforementioned media companies in the Photos below:

The Qatari news channel captured that the incident dented the beautiful game the two teams sold to the world but their focus was on Mali winning the game legitimately.

“Mali have beaten Tunisia 1-0 in a controversial Group F game at the Africa Cup of Nations (AFCON) that was ended prematurely twice by referee Janny Sikazwe, who later tried to play the final four minutes only for the North Africans to refuse.,” Aljazeera reported.

The BBC’s report was dominated by the errors of mistake that was committed by referee Zikawe.

“Mali and Tunisia’s Africa Cup of Nations game finished in chaos after the referee first signalled for full-time on 85 minutes, then ended the match when the clock showed 89 minutes and 47 seconds,” the lead of the report reads.

Sky sports also focus on the controversies as they caption the story “AFCON chaos as referee blows FT at 85 and 89 mins in match between Tunisia and Mali!

They also focused on the errors of the referee as they kept the phrase CHAOS throughout their report. The first six paragraphs of the CNN story never mentioned the score line of the game and the quality of football the two teams sold to the world before the incident.

It also also captioned it the incident” At the center of a controversy because of his decisions at the end of the match, Wednesday, the referee of Mali-Tunisia (1-0) would have been taken to the hospital for exams due to sunstroke.”