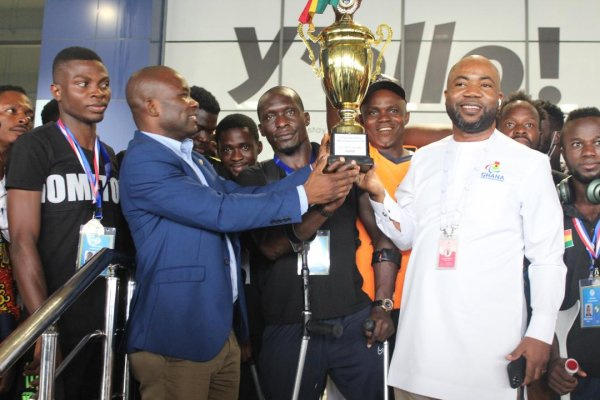 Mr. Samson Deen, President of the African Paralympic Committee (APC) says the recent victory by Ghana’s Amputee Football team should serve as a launchpad to take Amputee football and Paralympic sports in general to greater heights.

He said this at the arrival of the ‘Black Challenges’ as they are nicknamed at the Kotoka International Airport on Wednesday morning, following their remarkable feat in Tanzania where they emerged Champions of the Amputee African Cup of Nations.

According to Mr. Deen who doubles as the President of the National Paralympic Committee, this milestone should encourage members of the association to solve their impasses which had hindered the progress of the sport for over eight years.

“We should be proud, when we talk about the African movement of the Paralympic sports, the headquarters in Ghana. I would lead and make sure that we have the best of the sport here in our country,” he told pressmen.

Professor Peter Twumasi, Director General of the National Sports Authority, who was there to receive the athletes on behalf of the Youth and Sports Minister, Mr. Mustapha Ussif, congratulated the team for their exploits in Tanzania.

“We are thankful to you for representing this nation Ghana and we want to tell you that the entire Ghanaians as we speak now are all poised to meet with you and also to celebrate this success that you have brought to this country.

“We are so happy and thrilled by this great achievement, I mean in the first of its kind, a team of this nature by your own efforts and with some support from Government and the Paralympic committee you have been able to achieve this success and this is a testimony of great things to happen in Ghana’s Paralympic sports,” he said.

He further noted that the trophy should signify a path towards reconciliation among members of the federation to enable the sport to take its rightful position in Ghana.

Richard Opentil, captain of the national team in his remarks remained hopeful that their victory in Tanzania would serve as a yardstick to help in the development of the sports in Ghana.

He however apologized to Ghanaians for not using the right channels to participate in the tournament but was elated about their success.