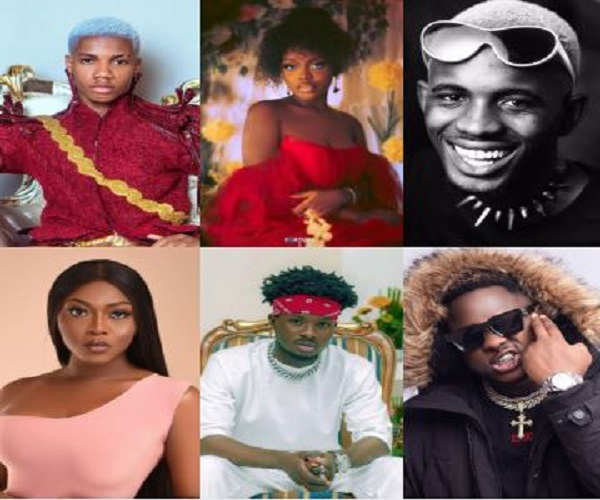 Ghanaian musicians who made hits in 2021

The Ghanaian music scene was lit in 2021 with the release of great tunes from both seasoned artistes and budding musicians who had their breakthroughs. From Highlife to Hip-hop to Amapiano amid other genres, these songs, ably produced by local music producers brought immeasurable excitement in the music space as music enthusiasts enjoyed the records.

The audience appeal and social media followers of some musicians increased considerably due to how popular their songs were as well as the conversations that emanated following the release of these songs.

Aside from the colourful music videos that graced the screens, some musicians came up with dance moves in their bid to promote their respective songs and were successful in their attempts as music lovers joined the trend by flooding various social media platforms, especially Tik Tok, with video clips of themselves partaking in the challenge.

GhanaWeb compiles some hit songs released in 2021. It is worth noting that the list is in no particular order.

Touch It by KiDi

KiDi in May 2021 released ‘Touch It’ off his ‘Golden Boy’ album. The music video has over 15 million views on YouTube. It was a massive hit on Tik Tok.

The song became an instant jam, with many music lovers and dancers partaking in the ‘Yeeko’ dance challenge on social media. It was released at a time drill music gained popularity in the Ghanaian music space.

The official music video for ‘Yeeko’ as of December 12 had nearly 3 million views.

This year has been a good year for female musicians in Ghana especially the young and budding singer, Gyakie. She made waves with her hit single ‘Forever’.

Not only was it big in Ghana; the song crossed borders to neighbouring countries like Nigeria among others.

Gyakie featured Nigeria’s Omay Lay on the remix of ‘Forever’ which currently has 21 million views on YouTube.

Although Black Sherif had released hit tracks in previous years, his monster hit songs which projected his brand and made him a household name were released this year. Announcing his readiness to take the industry by storm in May, Blacko, as he is affectionately called, released the First Sermon Freestyle.

The song has 2.3 million views on YouTube while Second Sermon which was released in July has over 8 million views.

Black Avenue Muzik signee Sefa smiled this year as her song ‘E Choke’ which had Mr Drew on it enjoyed massive airplay.

Her single was and still is a personal favourite of music lovers. It has remained a jam since its release in April.

When Sefa announced a dance challenge for ‘E Choke’, the response was mind-blowing. The song which was produced by Rony Turn Me Up has over 2.5 million views on YouTube.

Captain Planet of 4×4 fame collaborated with Kuami Eugene on his hit single ‘Abodie’ released in September 2021.

According to music lovers, Eugene granted a number of singers a ‘hit’ with his verse on their songs and ‘Abodie’ was not an exception. The hook was very catchy and was easy to sing along.

Fameye served fans with an inspirational tune this year.

The youngster topped music charts with his single ‘Praise’. In fact, it was a go-to song for hosts of morning shows in the country due to how inspirational it was. The slow tempo track was released in July 2021.

Dollar On You by Kuami Eugene

Kuami Eugene had a fruitful year. His single ‘Dollar On You’ worked magic.

The Lynx Entertainment signee is best known for producing hit songs including those he gets featured on.

‘Dollar On You’ was jointly produced by Disc jockey, DJ Vyrusky, and Eugene. As of December 2021, the views on YouTube was almost 3 million.

Wendy Shay served fans with a hit single titled ‘Heat’ towards the end of 2021.

Now a street anthem, the official music video for ‘Heat’ featured the Shay Gang, fans of the singer. It gained popularity partly due to some controversial lines. Resorting to the use of wordplay, Wendy Shay somewhat captured the names of some high profile personalities who had been mentioned in some controversial conversations although no evidence was provided to back claims.

The song was produced by Fox Beatz. The song has garnered over 1.3 million views on YouTube.

Rapper Amerado is counted among Ghanaian artistes who had a good year in 2021.

His track titled ‘Abotre’ was a massive hit! The song which is on the ‘Patience’ EP featured Black Sherif who added his magical touch to the viral song. The song talks about why it pays to be patient.

Rapper Medikal gave fans a danceable tune this year also. Titled ‘Accra’, the singer detailed the hustle in Ghana’s capital detailing the life on the streets in his hit single.

The remix of the song which featured the likes of Kuami Eugene, Fameye, Kweku Flick, Yaw Tog is considered one of the best collaborations of 2021.

It became an anthem due to the rhythm and content. Some persons who appear to not have a taste for secular music ended up singing the song due to the content. It talks about the desire to step out and work for money for survival.

With over 2.2 million, ‘Biibi Besi’ by Kwame Yogot has made it on the list of 2021 hit songs. The song is a high-tempo piece with comic lyrics from the ‘rap comedian’.

Kuami Eugene’s verse on the track is considered one of his best.