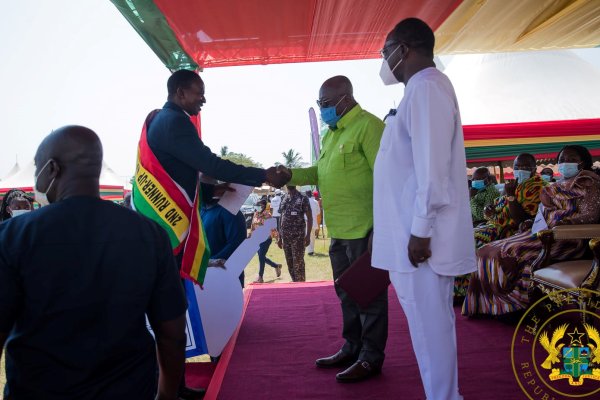 Cape Coast (C/R), Dec. 3, GNA- President Nana Addo Dankwa Akufo-Addo Friday said Ghana’s cocoa sector growth, the main stay of the economy, has been more pronounced from 2017 mainly due to the government’s policy reforms in the industry.
“From an average production of 880,000 tonnes, the country hit an all-time record production of 1,047,385 tonnes in 2021, being the highest ever yearly production of cocoa, since it was introduced into Ghana in 1879,” he noted.
Speaking at the 37th edition of the national farmers’ day celebration at the Adisadel College Park in Cape Coast in the Central Region, the President said cocoa the sector had seen significant transformation that had increased earnings from the crop for Ghana.
This, he said, had been made possible by the introduction of productivity improvement techniques that had ensured higher yields from the same acreage, the adoption of technology and practices that modernised cocoa production in an environmentally, socially and sustainable manner.
Also, the design of policies to address the inequalities in the international marketing system of cocoa by paying a Living Income Differential of USD400 per tonne of cocoa to farmers, and the fostering of partnerships and collaborative actions of stakeholders towards greater investments have helped propelled the industry.
Noting that his government’s record in sector had been most impressive, President Akufo-Addo told the gathering that the commencement of the provision of a pension scheme for farmers started in 2020 under his government, will guarantee decent livelihoods for over 1.5 million cocoa farmers after retirement.
“The pilot pension scheme has, initially, covered some two thousand, eight hundred (2,800) farmers in the New Edubiase Cocoa District of the Ashanti Region, and a nation-wide registration of all cocoa farmers is on-going under the cocoa management system to speed up the process,” he added.
The Ghana Cocoa Board (COCOBOD) was mandated, under Section 26 of the COCOBOD Law, 1984 (PNDC L.81), to establish a Contributory Insurance Scheme for Cocoa Farmers within the framework of the Social Security Scheme, so that cocoa farmers could also enjoy a well-deserved pension, upon retirement.
The Pension Scheme will enable cocoa farmers make voluntary contributions towards their retirement, while COCOBOD makes a supplementary contribution on behalf of the farmers.
This year’s event, jointly hosted by the ministries of Food and Agriculture, Fisheries and Aquaculture Development and the Ghana Cocoa Board, is being held on the theme, “Planting for Food and Jobs; Consolidating Food Systems in Ghana.
The day recognizes the contributions of farmers and fisherfolks to Ghana socio-economic development. A total of 160 farmers and fishermen across the country are to receive awards for their sterling effort at ensuring food security in the nation.
Alhaji Mashud Mohammed from the Meon District of the Northern Region was adjudged the 2021 Overall Best National Farmer.
He received GHc600,000 from the Agricultural Development Bank, 500,000 worth of insurance cover from GLICO insurance and a study trip to Israel sponsored by Broadspectrum Limited.