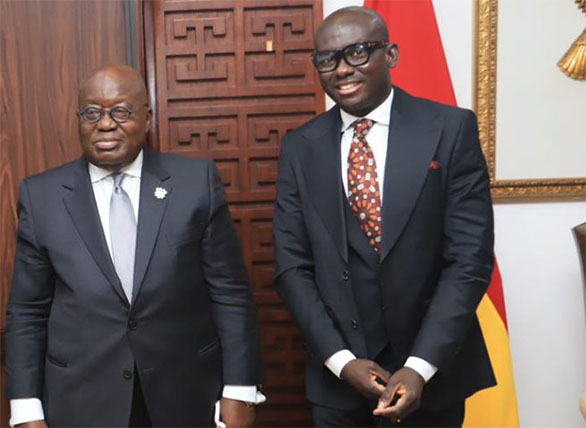 The Attorney General and Minister of Justice, Godfred Yeboah Dame, has said he has not come up with any new Legal Profession Bill as has been portrayed in the media.

He said “even the most basic step we undertake as part of the process for legislative drafting, stakeholder engagements, has not been performed for any Legal Profession Bill.”

The Attorney General (AG) was speaking that at the International Conference on the Future of Legal Education in Ghana/Africa, held at the auditorium of the University of Ghana School of Law, Legon, Accra on Monday where President Akufo-Addo endorsed legal education reforms in the country.

The AG said that any genuine attempt at the reform of professional legal education must, first, address the organisation, scope and content of the LLB programmes in the various Law Faculties/Law Schools.

He said “a lot of honesty, good faith and dispassionate introspection is required for this conference to achieve what I term “the twin objective of broadening access to legal education whilst preserving the integrity and quality of the profession,” adding “I place emphasis on good faith because, in recent times, discussions bordering on the theme chosen for this conference has been characterised by a lot of politicking and petty point scoring for parochial ends.”

“To my utter surprise and consternation, I saw a document being spread around social media and mass media as the Attorney General’s Legal Profession Bill. With unrestrained haste, various persons of high standing in society, including university professors, senior lawyers, etc. rushed to the media to make all manner of comments, virtually casting aspersions at the integrity of the Attorney General for coming up with such a bill. This, they did, without sparing even a split second to verify the accuracy of the information, even though, in truth and in fact, I am just a telephone call away from most of the commentators who were engaged in the media commentary!”

According to the AG, “in 2019, two bills affecting the legal profession were laid before Parliament. One of them was the document being bandied around as a new bill prepared by me and laid in Parliament. Following the expiry of the life of the previous Parliament, the bill lapsed and same could not be considered or passed by Parliament.”

“On assuming office as Attorney General, I did not adopt the bill. By a letter dated 2nd September, 2021, I wrote to the sponsor of the legislation, the General Legal Council, presenting my comments on the bill. I asked for the Chairman of the General Legal Council to present his responses to my comments on the bill. I further respectfully advised that in view of the fact that the bill will replace the Legal Profession Act, 1960 (Act 32), there is the need for a broad stakeholder engagement for the input of stakeholders to be incorporated in the bill.”

He said he also requested for “background information to complete the explanatory memorandum to the bill,” adding “I merely attached a copy of the draft (which was exactly the same as had been laid in Parliament two years ago) to my letter, so that the General Legal Council would be guided and be in a better position to appreciate my comments on the bill.”

“In light of these facts, how can anybody reasonably contend that I had prepared a Legal Profession Bill for the consideration of Parliament?” the AG quizzed.

“It may be apt to reiterate an admonition I gave at the recent Annual Conference of the Ghana Bar Association, that, spread of false information by lawyers, apart from being disreputable, poses a far greater threat to cohesion in society, especially when it comes from senior lawyers,” the AG said, adding “Mr. President, the nation deserves greater candour, objectivity and more thoroughness at this all important conference, in the consideration of proposals for reform of legal education in Ghana than has been demonstrated by some stakeholders in conversations on the matter in recent past.”

The AG then gave his personal opinion on the best way forward but added that “for the record, this does not represent a policy position by government. It is subject to discussions by all.”

He suggested that the proposition that the existing Law Faculties/Schools should undertake the PLC, “may seem a little rash,” saying “the proposition does not seem to take due cognizance of the fact that our system of legal education is modelled on the British system, and distinguishes between the purely substantive academic aspects of law and the practical component of legal education.”

He proposed that the General Legal Council be given the power to licence a number of law schools for the professional training of lawyers in the spirit of maintaining the distinction between the academic teaching faculties of law and the requirements for practical training.

He maintained that “qualification to the Bar is a serious matter everywhere,” adding “It requires robust institutions and dedicated students. A poorly trained lawyer is a menace to society and a liability to the administration of justice. Members of Ghana’s legal fraternity can only be as good as the education they receive.”