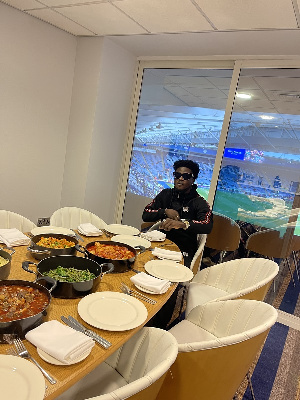 Kuami Eugene in the UK for Leicester and Watford match

He dines with the full view of the stadium behind him

Leicester beat Warford in the match

Ghanaian musician Kuami Eugene has shared a picture of himself in London where he went to watch a match between LeicesterCity and Watford in the English Premier League.

According to Kuami Eugene, he is in the UK to support his Ghanaian brothers and used the opportunity to watch Leicester’s game against Watford. A picture shared by the singer on Twitter showed him seated in a dining area with a view of the stadium behind him during lunch.

He was fully clothed for the weather as he dressed up in warm sportswear matching it with his usual signature black shades. He captioned his tweet “ supporting My African Brothers.”

On the Watford team are Ishmael Sarr and Kwadwo Baah. The game ended with Leicester beating Watford to 4-2 on Claudio Ranieri’s return to the King Power Stadium.