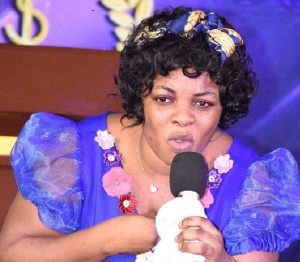 •She has promised to sue websites that carried the fake news

Actress Gloria Kani who is now an Evangelist has said that websites that published news of her wishing death for Kennedy Ohene Agyapong, Member of Parliament for Assin Central should prepare to face the law.

According to Gloria, she has been a target for bloggers and some websites that carry fake news just to tarnish her hard-earned reputation.

The MP has been rumoured to be battling with illness, this his family has denied by providing photos and videos of Mr Agyapong who appears healthy.

In a video sighted by GhanaWeb, the actress threatened to sue all the websites that claimed she wished death for Kennedy Agyapong.

“I have decided not to explain myself to anybody about what is circulating on social media. There is a saying that if you don’t learn to be mature, you’ll always act childish. I can’t always explain myself in a video when news about me pops up. Not any more, my message is simple, any media house, any media page that has published news about me wishing death for Kennedy Agyapong should be ready to provide evidence.

“I have screen shoot the platforms which carried the fake news and my lawyers are working on it… make sure you have proof of me saying that Kennedy will die because the laws are going to work this time. Thanks to IGP Dampare, the system is now working, I won’t talk much,’ said the actress.

Evangelist Kani furthered: “I am tired of this, now the system is working…God bless you IGP. I repeat that any media house that published the news about me should make their evidence ready. I will no longer speak.”