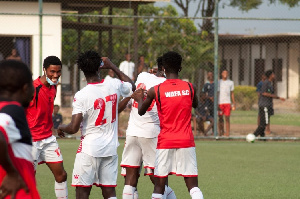 Eleven Wonders FC will entertain AshantiGold SC at the Ohene Ameyaw Park in Techiman this weekend to open their 2021/2022 Ghana Premier League campaign.

Wonders are seeking to start the season on a bright note with a win against the Miners on Sunday.

They had an infernal experience in the premiership last term having survived relegation on the last day with only one point above the drop.

The ‘Sure Wonders’ go into the season with a new technical direction led by Yaw Acheampong, replacing Ignatius Osei-Fosu who left the club to join Medeama SC.

The Techiman based club will also do without stalwart defender Rashid Mohammed who has departed the club.

Mohammed was one of the best performers in the league last season where he won 5 man of the match awards.

AshantiGold are making the over 180 kilometres journey from Obuasi to Techiman with only one mentality, a victory at the end of the match against Wonders.

The Miners had a very disappointing campaign in the premiership last term having finished in 9th place with just four points away from a relegation scare.

The Gold and Black outfit will be counting on their good run at the Ohene Ameyaw Park to clinch their first point (s) of the season.

AshantiGold in their two visits to Techiman last season didn’t lose a single game as they drew 0-0 with King Faisal Babes and 1-1 with Wonders.

Ernest Thompson Quartey is the new head coach of the club and will be hoping to begin his stint with a victory.

AshantiGold has strengthened their squad with the return of defender Kamaradini Mamudu from his loan spell at Karela United.

Larbi Koomson, former Ghana U20 striker Kennedy Ashia and former Accra Hearts of Oak captain Joseph Owusu Bempah have all been signed by the Miners.