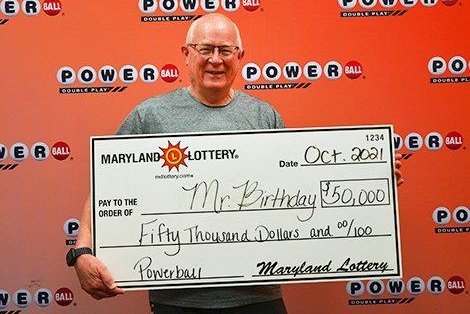 A 62-year-old Maryland man said he was buying supplies for his birthday party when his daughter suggested he buy some Powerball tickets — and he ended up winning $50,000. Photo courtesy of the Maryland Lottery

Oct. 20 (UPI) — A Maryland man had an extra happy birthday when he bought a $50,000 lottery ticket while getting supplies for his party.

The 62-year-old Calvert County man told Maryland Lottery officials he and his daughter were buying supplies for his birthday party later in the evening, and while at ABD Liquors in Prince Frederick, his daughter suggested he grab some Powerball tickets.

“I very rarely buy lottery tickets,” the man said. “If my daughter hadn’t mentioned buying tickets, I never would have thought of it. In fact, it took a week after buying them for me to remember to check the results.”

The man said he finally remembered to check the winning numbers from the Sept. 22 drawing and discovered one of his tickets was a $50,000 winner.

“I just couldn’t believe it. I showed them to my daughter, just to be sure. Then, we woke up my wife, just to be really sure,” he recalled.

The winner said he woke up the next morning concerned that his win had been a dream.

“I think that, deep down, I didn’t really believe it. When I woke up the next morning, it took me a few minutes to remember. I said to myself, ‘Did that really happen?'” he said.

The winner said he plans to share some of his winnings with a family member who is preparing to open a business, as well as donate to his church.