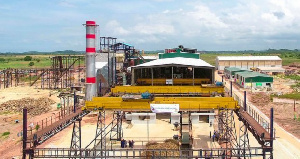 • The Komenda sugar factory was recommissioned in 2016

A Technical Audit report issued by the Ministry of Trade and Industry has revealed a number of circumstances that led to the non-functionality of the Komenda Sugar factory.

The sugar-producing factory, established in 1964, has become defunct due to technical difficulties and setbacks. The birth of the factory was based on the premise of producing sugar locally to reduce importation but that has not yielded results since its recommissioning in 2016.

The Audit Team made up of experts from academia, industry, and independent sugarcane consultants revealed that a test run on the facility was never completed before the Komenda Sugar Factory was re-commissioned in May 2016.

This was due to the unavailability of sufficient sugarcane for the test run.

The findings which was dated September 2017 and October 10, 2017, also showed the factory never produced any sugar after it was reconstructed.

It further showed that it was not positioned to produce the required refined sulphurless white sugar due to the absence of 35 component parts/units, which were not fully installed before the test run including for melt clarification, vertical crystallizers, molasses weighing system, bagasse compressor and a dosing system.

Meanwhile, excerpts of the executive summary of the technical audit report shared by Abdul Malik Kweku Baako on his Facebook timeline stated that the reconstruction of the factory which was to be completed in October 2016, was completed in March 2016 – seven months earlier than the expected date of completion.

The report stated, after the factory was completed in March 2016, “the testing of the sugar plant was carried out and sugar was produced successfully. However, full load production, for its installed capacity could not be carried out due to inadequate supplies of sugarcane (pg.2 completion report, May 2017) …”

“The factory has only been test-run during its commissioning. The test run did not go through the entire process to produce sulphurless white sugar as stipulated in the contract as some systems were bypassed and others were not installed,” the report continued.

“It took 17 days to crush the sugarcane to produce the raw sugar. This was due to a number of challenges the operators encountered during the test run. It has to be noted that, the sugar produced was not white refined sugar (at 50 ICUMSA) as required but semi-processed raw sugar having molasses (which is not edible),” it added.

The Audit Report further stated, the total fenced area earmarked for the nursery development was 63.4 Ha (158 acres). The cropped area was 49.9 Ha and out of that, 0.5. Ha was saline. “The remaining land area is covered by the roads in the nursery. Some of the plants showed stunted growth and empty patches.”

“There was a wide variation in the height of sugarcane on the same plot. The empty spaces were not filled thus reducing the expected plant population per hectare. However, other parts of the nursery showed strong and vigorous growth. It should be noted that none of the sugarcanes in the plots can be planted as cane this year since the planting date (May-June-July) is already past.”

“About 97% (48.8 Ha) of the cropped area is composed of the B41227 variety which is prevalent in the Komenda area. Investigations show that no variety selection was conducted since a period of 7-8 months was given as the duration for the nursery operation which was not enough for proper crop selection,” the report stressed.

During his ongoing tour of the Central Region, President Akufo-Addo revealed that a preliminary assessment conducted on the value of the factory showed it had been overvalued to the tune of some US$12 million.