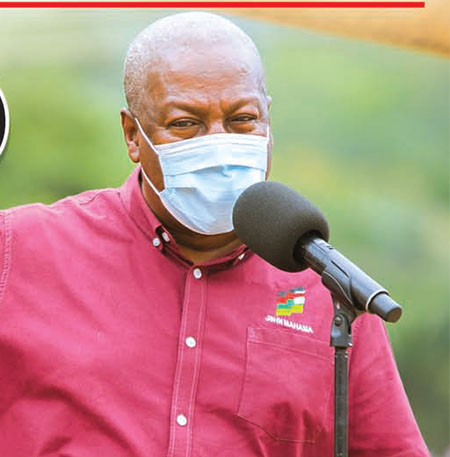 John Mahama
Former President John Dramani Mahama is expected to take his regional Thank You Tour to the Volta and Oti Regions from today, Monday and Tuesday, October 18 and19, 2021.
The Volta tour is on Monday after which he travels to the Oti region where the National Democratic Congress (NDC), during the 2020 general election, won all the eight parliamentary seats in the region.

Former President Mahama is expected to do a live radio programme on Beyond FM in the Nkwanta South Municipality, which would feed all local radio stations across the Oti enclave.

A statement issued by Oti NDC Communication Director, Mubarak Diplomatic, Mr Mahama is expected to speak on his ‘unbreakable legacy’ in the region amongst them being the CHPS Compounds, E-Blocks, roads, hospitals, and schools.

Former President Mahama would interact with the Regional House of Chiefs and other sub-chiefs at the Gateway Conference Hall at Nkwanta, the statement said.

He would meet the chiefs and people of the newly inaugurated Guan District at Likpe Mate, the district capital, it said.