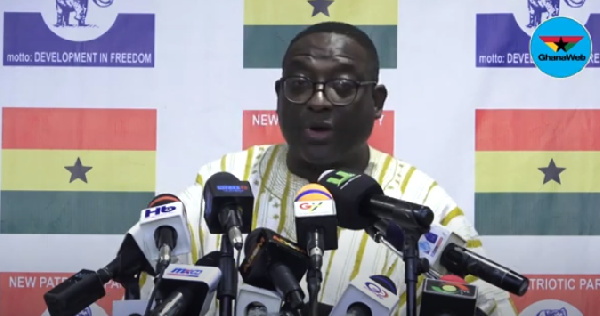 Communications Director of the New Patriotic Party, Yaw Buaben Asamoa, has expressed trust in the Parliament to deal decisively with the anti-LGBTQ+ Bill currently before it.

According to him, he is certain that lawmakers will take a decision that reflects the will and popular sentiment of the Ghanaian people.

He said the House will deal with the position of whether or not the sexual orientation was a matter of human rights along with rights conferred on human beings by God.

He said on Accra-based Peace FM (October 15) that in his opinion, the current brouhaha around LGBTQ+ has been occasioned by persons pushing for open advocacy of the orientation.

“The response is not for NDC or NPP but a national issue just as we are contributing… I believe that Parliament will determine legal stance on the issue to add to what God has given us as a human race.

“I don’t believe as reps of the people, they will allow such an orientation to be legalized. I believe that the push for LGBTQ+ issues to be overly liberalized, that people can easily advocate and invite people into the fold, I believe is the cause for concern.

“If that is allowed to slide, it will mean essentially that nothing is sacred. That is where the fear is, if you ask me. If you are leaving this for people to engage in, what then are you going to regulate? If it is about criminalization, we have laws on that,” he added.