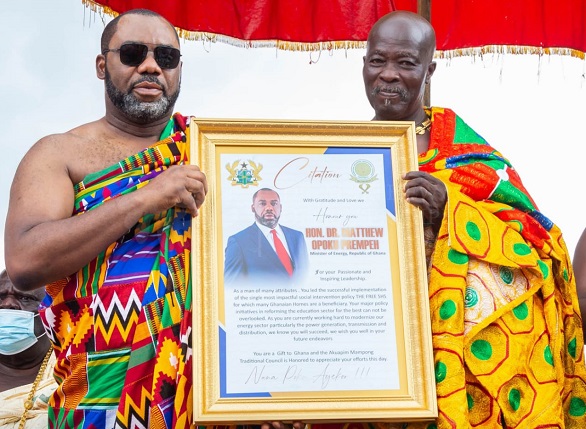 Napo being presented with his award

THE Akuapem Mampong Traditional Council, in the Eastern Region, over the weekend honoured Dr. Matthew Opoku Prempeh aka ‘Napo’, the Minister of Energy, for spearheading the successful implementation of the Free Senior High School (FSHS) policy.

At a colourful durbar of chiefs and people in Mampong, Napo was presented with a beautiful plaque and a citation, which mostly highlighted his leadership skills and hard work, that contributed to make the famous Free SHS programme a reality when he was the Minister of Education before moving to Energy.

Part of the citation stated that Napo “is a gift to Ghana,” adding that Napo’s wonderful exploits in both the education and energy ministries speaks volumes that he (Napo) is indeed an asset for the country and the world at large.

Napo served as Education Minister from 2017 to 2021 in the Akufo-Addo-led NPP administration, and has since received a number of awards from top universities in the country and other reputable institutions for his efforts in ensuring the implementation of the Free SHS policy in just seven months in office.

During the 2021 edition of the Ohum Odwira Festival, held on Saturday, the chiefs and people of Mampong Akuapem, led by their overlord, Osabarima Kwame Ottu Dartey III, used the occasion to honour Napo for his sacrifices for the country, so as to inspire others to emulate him.

According to the Mamponghene, the Free SHS social intervention programme has virtually removed all the barriers that prevented students from poor homes from realising their academic goals, and said Napo who supervised the implementation of the laudable policy deserved the honours to serve as motivation for others to do more for the state.

He said school enrolment in the various SHSs in the country has increased significantly since the introduction of the Free SHS programme, adding that the proper training of the human resource of the country would surely lead to national transformation.

According to the Akuapem Mamponghene, aside the implementation of the Free SHS programme, Napo also ensured that there were a lot of positive reforms in the educational sector, which is now yielding positive results in the teaching and learning in the schools.

In his remarks, Napo assured that so far as he remained as the Energy Minister, he would work to ensure that frequent power cuts, popularly known as ‘Dumsor’, would not return in the country again, stressing that constant power supply was key to the development of the country.

“Without light there will not be any proper development; Dumsor that hit our country some years ago, destroyed businesses and brought hardship,” he recounted, assuring that the ongoing upgrading of transmission lines and other projects, would help to boost constant power supply.

Napo, who doubles as the Member of Parliament (MP) for Manhyia South in Kumasi, stated that the famous Free SHS programme had come to stay, adding that the country was grateful to President Akufo-Addo for his vision of introducing the Free SHS policy to transform education.

The former Education Minister saluted all the hardworking staff at the Education Ministry for their invaluable roles, contributions, hard work and sacrifices which contributed to the successful implementation of the Free SHS programme, urging them to sustain their hard work.