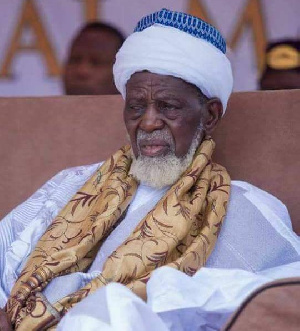 • The National Chief Imam supports the anti-LGBTQ+ bill before Parliament

• Parliament is scheduled to debate the controversial bill this month

This is according to his spokesman Sheikh Arimiyao Shaibu, who also confirmed the cleric had specifically congratulated Speaker of Parliament, Alban Bagbin, for his stance on the current debate.

“I refer you to the last visit by the Speaker of Parliament, Right Honourable Alban Bagbin, he paid a courtesy call on the Chief Imam. Chief Imam was excited with his coming and he said he had heard his (Bagbin’s) earlier statement about the LGBTQ+ position.

“Chief Imam commended him on that and urged him to make sure the bill was passed to outlaw LGBT and other related sexual orientations in the country. That is a very firm and consistent, constant position of the Muslim community,” he said on Joy News’ Upfront programme earlier this week.

What Bagbin said about the LGBTQ+ bill months ago

“We will not threaten anybody but we shall also not be threatened. Those threatening Members of Parliament who are leading this bill, please be warned. We cannot be threatened in our homes, this must be stated loud and clear to those who have come to do business in Ghana.

“Those who represent their countries and think that they are right, we also represent our country, and they will never, they can never dictate to us as to how to live or not live in this world. And I am very clear in my mind that this house, the parliament of Ghana will pass this bill as soon as possible.”