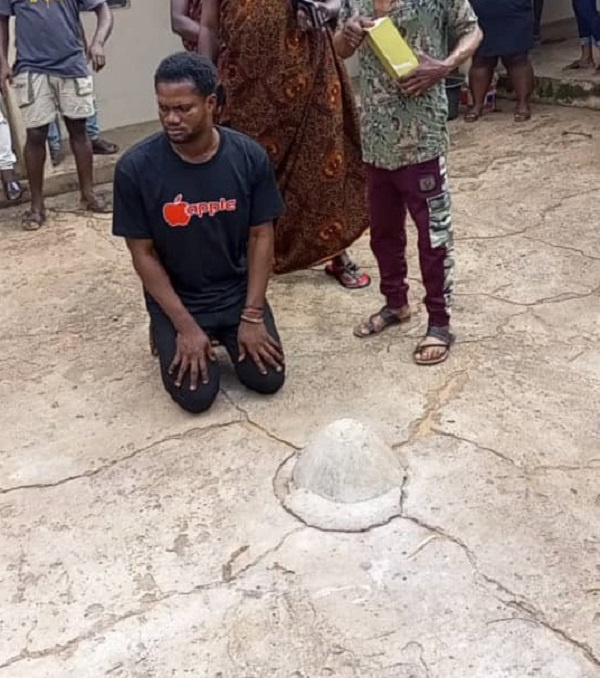 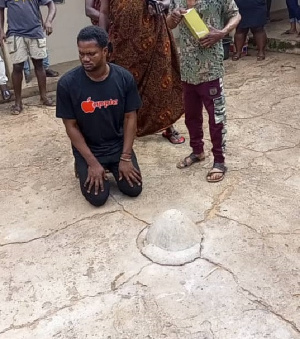 The suspected gay, Yaw Barima Razak going through purification by the Traditional Council

• He is said to have confessed to being gay

A 21-year-old-man has been fined 24 sheep by the Nkoranza Traditional Council for engaging in homosexual activities.

According to a report by Adom FM’s Christian Ofori Kuma monitored by GhanaWeb, the young man identified as Yaw Razak Barima was apprehended by a group of young men in the area on Wednesday, October 6, 2021.

Baffour Sarkodie, a spokesperson of Nana Yaa Dudaa Kani I, who is the Queen Mother of the town, is reported to have stated that a young man identified as Frank who was suspected to be a party in the act was trailed by the youth to the house of the suspect.

“This was at about 6:30 pm on Wednesday after Frank who had on several occasions told his friends about Barima’s act decided to lead them to his house after a phone call from the latter, requesting they meet up,” he narrated on Adom FM’s midday news.

Razak after reportedly being caught in the act denied the allegation of engaging in homosexuality despite six teenagers coming forward to testify against him.

He is however said to have reversed his position and confessed after the Traditional Council threatened him to swear an oath.

“He was still being adamant until we threatened to make him and the six others swear an oath and he confessed to his acts,” he disclosed.

Following his confession, the suspect has been asked to provide 24 sheep for purification.

The process for the purification is said to have already commenced and the suspect is expected to reappear before the Council in two weeks for a determination of his fate.