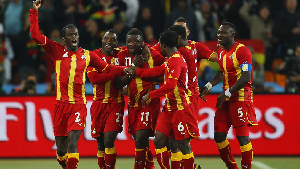 Black Stars players will start arriving on Monday to begin camping ahead of the upcoming FIFA World Cup qualifying match against Zimbabwe.

Ghana will take on the Warriors in the first game of the doubleheader on Saturday 9 October 2021 at the Cape Coast stadium.

The Black Stars will travel to Zimbabwe for the reverse fixture three days later at the National Sports Stadium in Harare.

The team will start camping and training in Accra before they travel to Cape Coast on Wednesday to continue their preparations.

Rajevac will prune the squad after few days of training before the team makes the trip to Cape Coast.

Ghana is currently placed 2nd on the standings after two matches with just one point behind leaders South Africa and levelled with Ethiopia.