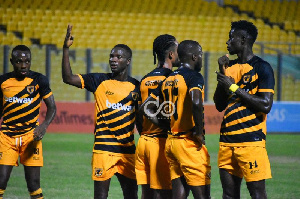 Ashantigold S.C were suspected to have played a match of convenience on matchday 34

• They have until Monday, September 27, to respond to the charges levelled against them by the GFA

News coming indicates that the Ghana Football Association has charged ten Ashantigold players over possible match-fixing in the Ghana Premier League game between the Miners and Inter Allies.

Ashantigold and Inter Allies were suspected to have played a match of convenience on matchday 34 in the just ended 2020/2021 Ghana Premier League.

The game ended 7-0 in favour of Ashantigold at the Obuasi Len Clay Sports stadium but the intriguing thing about the game happened in the second half when defender Hashmin Musah decided to score two intentional own goals.

The Prosecutor of the GFA has charged several officials and players in connection with this game and the latest is that ten players of Ashantigold have been charged.

“The GFA Prosecutor has charged ten players of Ashantigold SC for violating Article 34(5)(a) of the GFA Premier League Regulations.

“The players have been charged for facilitating and participating in the playing of a fixed match or a match of convenience during the 2020/21 Ghana Premier League Week 34 match between Ashantigold SC and Inter Allies FC at the Len Clay Stadium on July 17.

“They are all expected to submit their Statements of Defence to the charges on or before Monday, September 27 after which the GFA Disciplinary Committee will adjudicate their cases respectively,” the GFA’s statement ended.