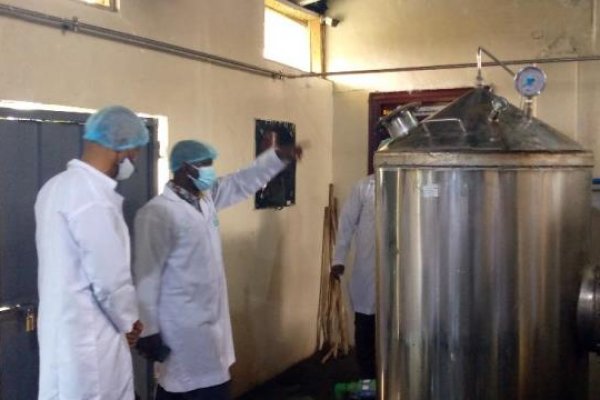 He said that brought about huge loss to the Company following a halt in production of products and the laying off of some staff, costing it over 10million Ghana Cedis.
Mr Awere, however, said they had resolved the regulatory issues and was now into production of COA Mixture, which had replaced COA Food Supplement (FS).
The Deputy CEO said this when the Institute of Financial and Economic Journalists (IFEJ) paid a visit to the Company’s factory at Wosorkrom in the Abura Asebu Kwamankesse District of the Central Region.

He said the Company after the impasse in October 2020 to date, had produced over 8,000 boxes of COA mixture, 200 boxes a day.
Mr Awere said, they had increased staff capacity to more than 120 in the various departments from a little over 50 in the previous years.
“We are geared towards increasing production to meet our demands. Plans are far advanced to establish a new fully automated factory nearby to add to this complex,” he added.
The Company produces COA mixture from six leaf plants they grow.

The production cycle of COA mixture involves automated washing and milling of the leaves, distillation, bottling and labelling and product testing.
The FDA on April 17, 2020, ordered the recall of COA FS from the market due to alleged microbial contamination.
The Authority later destroyed a batch containing 692 boxes of COA FS, costing GH¢1.69 million, in the Central Region.
The FDA on September 10, 2020, gave the Company authorisation to distribute COA FS as COA Mixture because it was no longer registered as food supplement, but a herbal medicine for general wellbeing.
- Advertisement -