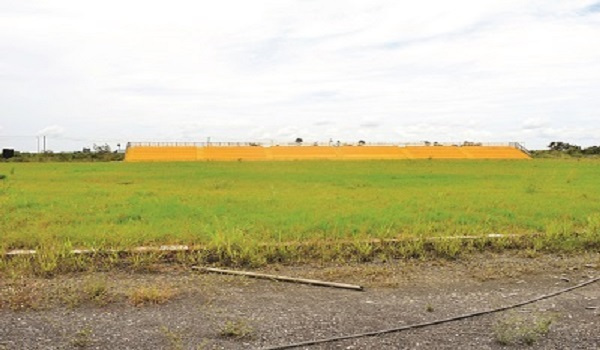 A $2.4million multi-purpose Youth Sports Centre project which took off in March 2018 has been abandoned with the site left for cattle to graze on.

Regular visitors to the site include some members of the public who turn up to gather fuelwood from the shrubs behind the uncompleted spectators’ stands and other structures.

These came to light on Saturday when the MP for Ho Central, Mr Benjamin Kpodo visited the project site to see the standstill situation of the project at first hand.

There were no workers at the site that morning and so the MP, accompanied by an aide inspected the facility.

Some of the tracks were holding large portions of water while the seats on the three stands were left to the mercy of the weather.

The 10,000-seater project, which is under the National Youth Authority (NYA), was being undertaken by Wikado Construction, a local firm and was scheduled to be completed in February 2019.

It was expected to provide a FIFA-standard football pitch, an eight-lane athletics track, a tennis court, a basketball court, a handball court, a gymnasium, a counselling centre, a youth ICT centre, an entrepreneurship centre and a restaurant.

But when contacted, Mr Yao Semorde, the Regional Director of the NYA declined to comment on the state of the facility.

The facility was meant to provide the youth with opportunities to develop their talents.

However, the site is now the scene of scrap construction equipment, weeds and birds of prey.

The two security men left at the site without any wages now resort to breeding chickens at the entrance of the facility to make a living.

Subsequently, some members of the public now refer to the site as a glorified hen coop.

The MP told the Times Sports during the rounds that he had filed a question to the Minister of Youth and Sports for an explanation for the present state of the project.

Mr Kpodo gave the assurance that he would pursue the matter to the fullest degree.