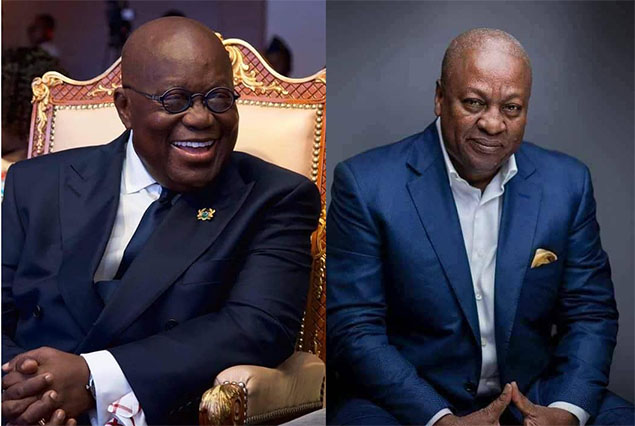 President Nana Addo Dankwa Akufo-Addo has described the tenure of his predecessor, John Dramani Mahama, as ‘an unmitigated disaster’, describing his stewardship in economic management between 2013 to 2016 as ‘abysmal’.

“I wonder what words should we describe his (Mahama) stewardship of Ghana. It is an unmitigated disaster, that’s what I would call him,” the President fired on Friday, following the incessant attacks unleashed on his administration by Mr. Mahama in recent times.

There was also another friendly fire from the corner of Vice President Dr. Mahamudu Bawumia who said the recent “Do or Die” proclamation of the former President ahead of the 2024 general election shows how desperation has taken hold of Mr. Mahama.

Mr. Mahama has been on what he says is a ‘Thank You’ tour and has been attacking the President and his NPP government, calling them among other things, a corrupt bunch who must be removed from office.

In the ensuing heat, the former President appeared to say that the 2024 general election will be a life and death matter and the chilling comment has sparked heated debate.

As he moved around, he also laid claim to some programmes like the Planting for Food and Jobs, initiated by the Akufo-Addo-led NPP administration, creating the impression that those programmes were his ideas being poorly implemented by his opponents.

Mr. Mahama, taking his ‘Thank You’ tour to the Bono East Region last Tuesday had said on Akina Radio at Techiman that “it is said that you learn lessons from things that happen so we have also learnt from 2020. The elections will be won or lost at the polling station,” he said whilst appearing to hit the table.

The former President, who is a twice-defeated NDC candidate (2016 & 2020), then refused to withdraw the provocative statement and even shot back at critics sarcastically that those misinterpreting his chilling comment did not complete schooling.

Last Wednesday, on Moonlite FM in Sunyani, Mr. Mahama insisted that the slogan ‘Do or Die’ was an idiomatic expression which he explained it as “a critical assignment that you have, and you must do the needful or perish.”

“What I’m saying is, NDC must not wait to go to the Supreme Court. We have to be vigilant at the polling station and collation centres; and so, I won’t retract. The next election for NDC is going to be a do or die affair,” he repeated the statement.

In a subtle response to Mr. Mahama’s attacks, the President stated last Friday that, “I wonder whether this statement was made tongue in cheek by the former President. When you look at the record that this political leader, who can accuse my government of mismanagement, there are a few facts that when you put on the table to compare his performance and mine, it would tell you that if what I am offering people is economic mismanagement.”

President Akufo-Addo made the remarks at Hohoe during an interview on VOV Radio 95.7 last Friday when he was commencing his tour of the Volta Region after commissioning, inspecting and cutting sods in the Oti Region during the week.

According to President Akufo-Addo, under the tenure of Mr. Mahama, economic growth rate in 2016 stood at 3.4%, the lowest in two decades; with all other macroeconomic indicators pointing in the wrong direction.

“Inflation, when he left office, was 15.4%; today, at the end of July, which are the last hard facts from the Statistical Service, it’s 9%. Interest rates are always a good determinant of how the economy is operating, 32% in December 2016, today, it is 20.6%. We are talking about treasury bill decline in interest rate, we are talking about the trade deficit that was $1.8 billion in 2016, to a trade surplus of $2.6 billion at the end of 2019,” the President said.

He stressed that if these statistics, which, prior to COVID-19, led to Ghana being one of the fastest growing economies in the world with a GDP of 7%, “can be considered economic mismanagement, then I am wondering what would be the description of the economy managed by Mr. Mahama”, who he said had taken Ghana to the IMF for policy credibility after running the economy aground.

Responding again to comments made by John Mahama, asking government to organise an economic forum, President Akufo-Addo stated that “if the economic forum is going to be a repetition of the so-called Senchi Consensus, then I think I have to spare the people of Ghana this sort of development.”

He continued, “The Senchi Consensus was an unmitigated disaster, out of it we went into the embrace of the IMF with all the difficulties that came from there and the disarray it pointed to in the economy of our country.”

The President, thus, urged former President Mahama to be wary of commenting on matters to do with economic management.

“He is not on strong ground when he is talking about the economy. His track record, I am reluctant to use these strong words, but in normal parlance, I would say it is abysmal and, therefore, he has no lessons to give me at all in the management of the economy,” President Akufo-Addo added.

Congratulating the award winners whilst consoling those who came close to being rewarded, the Vice President said “let me congratulate the award winners for tonight and I wish those who could not make it a better luck in 2022. You know when you go for these competitions and awards, it is not ‘do or die’, so we wish you better luck in 2022,” amid spontaneous laughter and applause.

Still throwing jabs, the Vice President said, it is practically impossible for anyone seeking to challenge the results of an election at the Supreme Court to succeed without presenting real pink sheet evidence to support his or her election petition, in direct response to Mr. Mahama’s claims that the NDC will not go to court again but settle scores at the polling stations.

Mr. Mahama after the 2020 election mounted a legal challenge at the Supreme Court, claiming he won the election but was denied victory, after he and his party leaders had amassed their supporters to hit the streets to cause mayhem.

However, by the time the case was being heard, the NDC’s stance that Mr. Mahama was denied victory had shifted to whether or not none of the 12 candidates that participated in the 2020 Presidential Election got the constitutionally mandatory 50 per cent plus one of the total valid votes.

The NDC also pushed that the Supreme Court should determine whether the Electoral Commission (EC) had to organise a run-off election between Mr. Mahama as petitioner and President Akufo-Addo who was declared winner by the EC on December 9, 2020 after the crucial December 7, 2020 general election.

Mr. Mahama made all the claims without submitting a single evidence in court and rather pushed the burden of proof on the Electoral Commission to discharge, which the court rejected.

A few hours after the petition was unanimously dismissed by the Supreme Court, Mr. Mahama refused to concede defeat, and rather launched blistering attacks on the judges, the President and some state institutions.

Dr. Bawumia said last Friday that, “But seriously, if you go to court to challenge an election result and you have no pink sheets, then your case will die!”