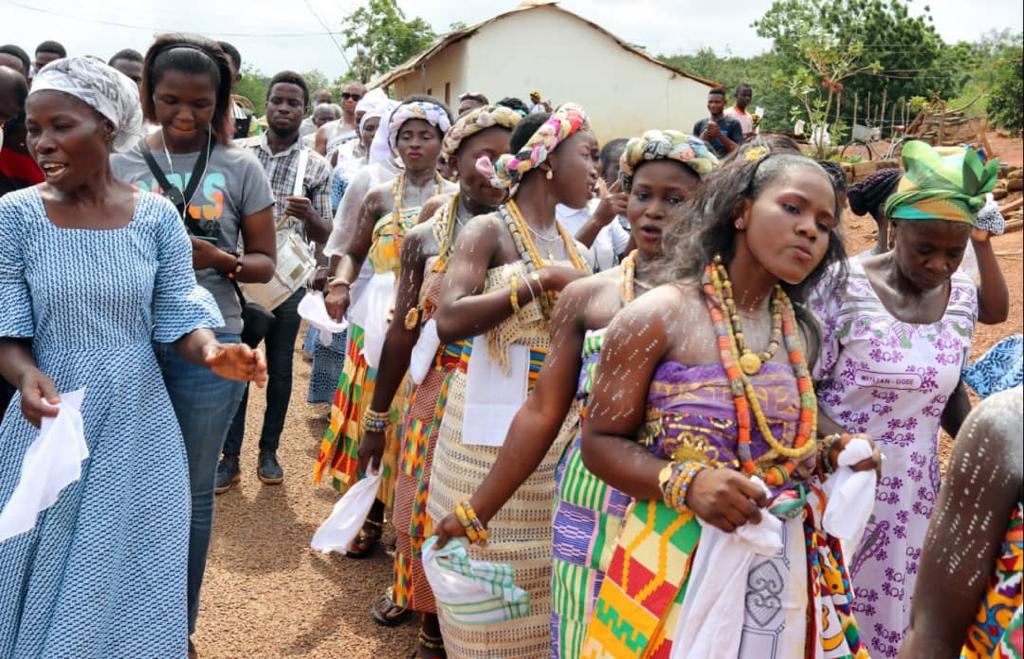 It was an array of beautiful colours from Ekumfi Abor in the Central Region when 17 young women participated in the 2021 version of Puberty rites of the community to usher them into womanhood.

The eligible young women of school-going age and particularly Junior High School graduates dressed in traditional Kente clothes were paraded through the streets of Ekumfi Abor against a background of drumming, music and dancing, after being taken through some ritual and womanhood lessons.

They were decorated with jewels, colourful hair scarfs, headgears woven with three hair scarfs, African beads and traditional sandals for the parade.

The rites (Bragor in Fante language) held on September 3, forms part of the ‘Homecoming’ activities held by the Chiefs and People of Ekumfi Abor.

‘Homecoming’ is an initiative of the Chiefs to bring back home citizens of Ekumfi Abor, far and near, to raise funds to support the development of the community, which incidentally produces a chunk of the pineapple required by the Ekumfi Juice Factory.

The ceremonies the younger women went through were in line with the Fante culture, and the people of Abor gives prominence to this ceremony because through that the young women are exposed to good morals to help them in their upbringing and adulthood.

“Besides the expectation that the younger women remain virgins prior to the Puberty rites, it is a taboo for women to get married or pregnant without having gone through adulthood initiation.

“The performance of the rites is to help the young women of Abor grow up as disciplined adults who have control over their sexual orientation, to avoid premature pregnancy and unwanted babies,” queen mother, Nana Araba Arhinfuwa III, said.

Below are some pictures from the ceremony: