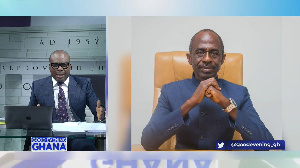 Talk is rife that Johnson Asiedu Nketia will contest for the chairmanship position when next the NDC elects national officers, he has personally not confirmed that rumour.

Commenting on developments in the NDC on the 9th September, 2021 edition of his Good Evening Ghana programme, Adom-Otchere said years of service to the NDC qualifies Asiedu Nketia to become the leader of the party.

“Johnson Asiedu Nketia is migrating from the General Secretaryship position, now he is going to be chairman of the NDC, doesn’t he deserve it? He does deserve it. In terms of the work Asiedu Nketia has done for the NDC, he thoroughly deserves to be its chairman.”

He added: “However, he has to contend with Samuel Ofosu Ampofo, the incumbent chairman, another cadre who has come through the NDC from his student days and risen through the ranks in the party.”

Asiedu Nketia is a known face in Ghana’s politics and the longest-serving General Secretary of any political party in Ghana having assumed the role in 2005.

He is a former Assembly Member for the Wenchi District and represented the district during the Consultative Assembly that brought the 1992 Constitution into being, he is also a former Member of Parliament and former deputy Minister under the Rawlings government.