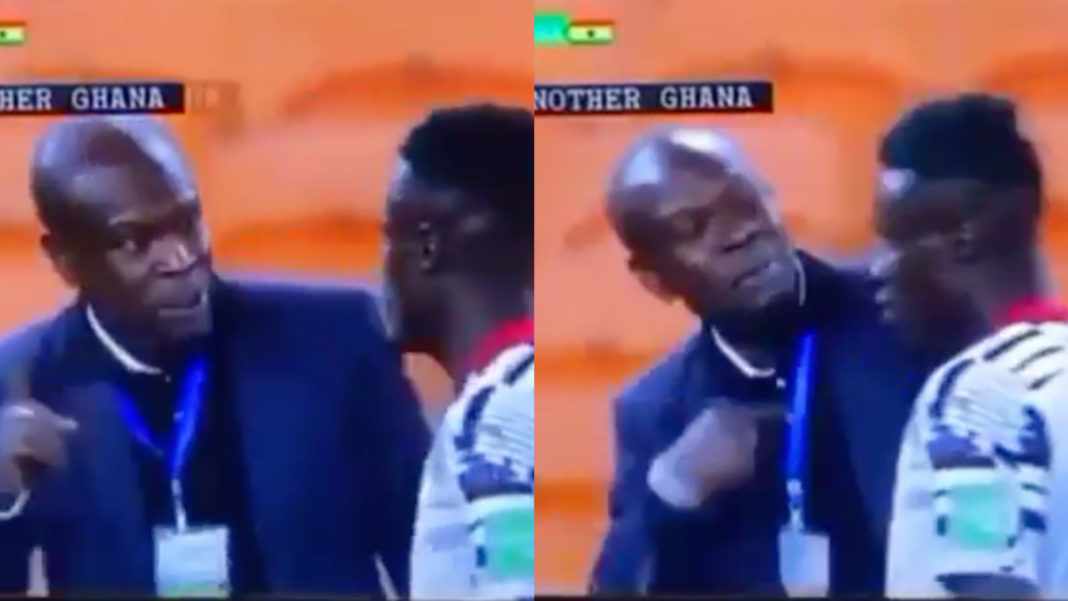 A video gives a vivid account of Black Stars coach CK Akonnor using intimidating words to direct striker Kwame Poku to score or risk playing for the team ever again.

This happened when the Black Stars were down by a goal to nil in their qualifying match against South Africa on Monday where the coach decided to introduce the Asante Kotoko forward to salvage a point for the team.

Well, CK Akonnor verbally warned the player to either score or blow his chance of playing for the Black Stars ever again.

The lips of the distraught CK Akonnor muttered the words with force to the striker who was playing for the Black Stars for the very first time.

From the lips of the coach, he said in Twi: “MedƆ Nyame sɛ, w’anhyɛ goal, menma wo bƆ biom da” translated “You risk playing for the team ever again if you fail to score a goal.”

The Black Stars suffered a loss in their World Cup Qualifying match against South Africa today and as result Ghanaians are asking for the immediate sacking of coach CK Akonnor.

According to many, the coach lacks the mental ability and intellectual know-how to coach and manage the national team of Ghana, The Black Stars.

His tactics have been questioned, his lineups have been debated and his overall performance has failed to propel the team to victory. While the FA President admonishes Ghanaians to bring back the love, many believe with CK Akonnor at the helm, Black Stars has no future.

The win percentage of CK Aknnor since he took over from Kwesi Appiah is 40 per cent; the worst performance by any Black Stars coach in history.

As result, Ghanaians are very livid, calling for his immediate sacking because the Black Stars fail to impress, lack the ability to even swing passes together and are unable to create clear cut goalscoring chances.