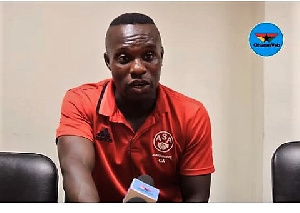 Bank roller of Attram D’Vissa and former player of Accra Great Olympics, Godwin Attram, has affirmed that although the standard of Ghanaian footballers has developed, it cannot be compared to their era.

He was responding to a question posed to him by Isaac Wallace of Rainbow Sports during the Kantanka Cup concerning the kind of performance he has watched so far as a former player and a coach.

“He stated that Ghanaian footballers are developing, and it very encouraging to see such improvements as a former player,” he stated.

He added that the standard with which their era evolved had not been overpowered by the current generation of players.

“Players of this generation are playing very well but not to the standard with which our generation got to. I appreciate the efforts these young and upcoming players are exhibiting and hopes it continues to outcast their generation,” he added.

Coach Attram also added that the upcoming young players should learn from the past players and always seek advice from the Old players.

“As I said already these players can get to our level, but we can help these players to break the boundary between these young players and the Old players,” he added.

He concluded that with the help he has given to his boys, thus Attram D’Vissa, you can realize the impacts he has added to the club.

“Attram D’Vissa players like Barcelona not because they watch Barcelona but the training and advice I have been offering my team have had an impact on the young boys and the whole team as well,” he stated.