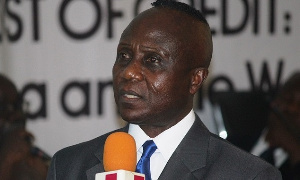 The Institute for Economic Affairs (IEA) is calling on the government to provide greater clarity on the weight of the energy and financial sectors clean-up debts as a component of total public debt.

According to the Director of Research at the Institute, Dr John Kwakye, an itemization of these and other key components of government expenditure would aid in dispelling the notion of covertness which appears to habitually characterize the budget and have a significant impact on the public perception of the state’s financial transparency.

The minister responsible for finance, Ken Ofori-Atta, reported in the mid-year budget review that the nation’s public debt figure as of the end of June stood at GH¢334.6 million or 77.1% of GDP. He said the figure includes the energy and financial sector costs, without stipulating what fraction they accounted for.

Offering comments by the Institute on the mid-year budget, Dr Kwakye said: “These two form part of government expenditure, so they should be shown somewhere; they cannot disappear from the books… if the government feels like these are extraordinary, irregular expenditures, that is fine but let us see it; indicate it somewhere, put a few lines there [in the statement] to show the true value transparency and credibility demand that we show these things,” he said.

In a similar vein, Dr Kwakye indicated that he had expected further insight into the nation’s updated expenditure on COVID-19, saying that such a crucial component of the government’s expenditure over the last year should not be shrouded in mystery.

The IEA’s Director of Research once again bemoaned the state of revenue mobilization, saying it remains “a serious challenge in Ghana.” Whilst admitting that the challenge is indeed surmountable, he stated that it would be futile to continue adopting measures that have consistently failed in boosting revenue collection.

He also described as ‘peanuts’ Ghana’s tax and total revenue projections which stood at 12.7% and 16.5% of GDP, respectively. This, he argued, is so especially as they compare unfavourably with that of other middle-income countries, which average 25% and 30% of GDP. “The tax revenue and total revenue projections for 2021 are about GH¢56 billion (US$9.7 billion) and GH¢72 billion (US$12.4 billion) respectively; these are peanuts, to say the least,” he said.

He stated that failure to widen the tax bracket and plug the numerous leakages that besiege the nation’s taxation systems, coupled with expenditure that consistently neglects capital expenditure in favour of recurrent expenditure, dominated by compensations and interest, would leave the country is in danger of undoing recent gains and slipping back into lower-middle-income status.

Following Mr Ofori-Atta’s disclosure of the government’s intention to create one million jobs within the next three targeted at young persons, Dr Kwakye hinted that the crowding out of the private sector by the state for funds from banks could impede the execution of the initiative.

This comes as data published by the Bank of Ghana in its Summary of Economic and Financial report for July shows gross advances to the private sector recorded an annual growth of 5.7%, versus the 15.7% recorded a year ago, whilst credit to government has grown by 7.9 percentage points over the comparable period.

He, however, stated that dedicated lending institutions such as the proposed Youth Banc and the impending Development Bank could remedy the situation if administered objectively.