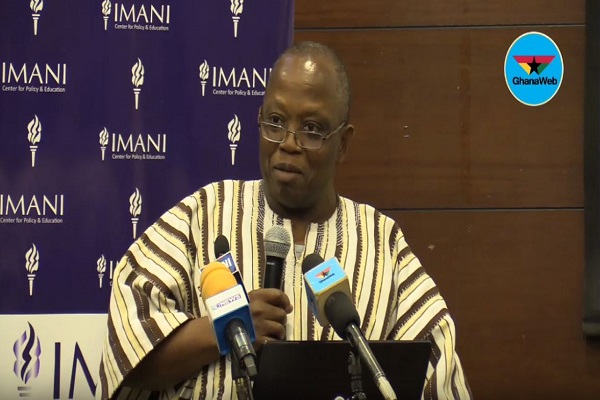 The Information Minister, Kojo Oppong-Nkrumah, in August 2020, debunked claims that President Akufo-Addo had intentions to sack the then Auditor General, Daniel Yao Domelovo.

The Auditor General was directed to proceed on leave by the president after his accumulated leave of 167 days in June 2010.

Many suggested that the move was to find a replacement for Mr Domelovo during his absence but reacting to this, Mr Oppong-Nkrumah insisted that, “Domelovo has not been fired.”

Read the full story originally published on August 5, 2020, on Ghanaweb

The Information Minister, Kojo Oppong Nkrumah, has dismissed suggestions that the directive for the Auditor General, Daniel Domelovo, to proceed on leave is a ruse being used by the president to sack him.

Speaking in an interview on GHONE TV on Wednesday, Oppong-Nkrumah justified the directive stating that the Auditor-General will resume work after he exhausts his leave.

Mr Domelovo was asked to take his accumulated leave of 167 days in June by the President, a directive that has been heavily criticized by majority of Ghanaians and several anti-corruption agencies.

A section of the public has suggested that Mr Domelovo will be replaced before his leave is exhausted but according to Oppong Nkrumah, President Akufo-Addo has no intention to dismiss the Auditor General.

“Domelovo has not been fired,” Oppong Nkrumah told host Serwaa Amihere adding, Akufo-Addo has not fired him.”

On Tuesday, July 28, it was revealed that the locks of the Auditor General had been changed after Mr Domelovo passed by the office to pick some documents.

The letter to the President, signed by Chairperson of AFROSAI-E, a regional organisation with the Auditors-General from 26 English-speaking supreme audit institutions (SAIs), by Ms L Taylor-Pearce and the Chief Executive Officer Ms MMR Nkau stated that they are deeply concerned about the grave repercussions of the infringement on the independence of the Auditor-General of Ghana.

“Effective SAIs enshrine principles of good governance and make a difference in the lives of citizens by contributing to accountability, transparency, integrity, staying relevant and leading by example.

“To deliver these value and benefits, a SAI needs an enabling and conducive institutional framework. This includes independence as a primary requirement. We believe that since its establishment, SAI Ghana has made effective strides to institutionalised these values.”

The letter came after several CSOs in Ghana called on the president to rescind his directive and recall Domelovo to continue with his work.